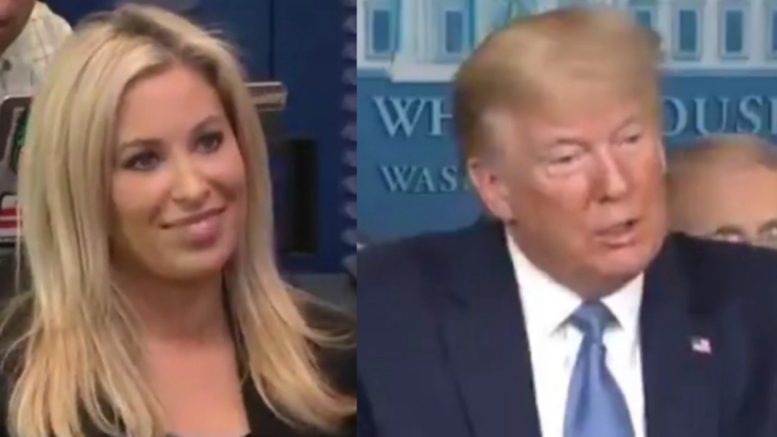 Members of the Coronavirus Task Force held a press briefing Saturday to give an update on the COVID-19 pandemic.

During the briefing, President Donald Trump took questions from reporters and issued rare praise to an OAN reporter for her question, pointing out that the network is “fair” in their reporting.

OAN’s White House correspondent, Jenn Pellegrino, asked the president: “The Washington Post ran a story suggesting that you delayed taking action on the virus in January and February. Dr. Fauci has indicated that your action in the Chinese travel ban helped America immensely. What do you say to The Washington Post?”

The president explained that he gets a lot of credit from people for restricting travel from China, adding: “I wish China would’ve told us more about what was going on in China, long prior to us reading about it, even though the news isn’t exactly disseminated. As you know China kicked the Washington Post out of China. And they kicked the New York Times out of China, [and] I guess the Wall Street Journal. … I think it’s a terrible thing they did.”

“But I also think it’s terrible when people write inaccurately about you, and they write inaccurately about me every single day, every single hour. And by the way, your group– I really think, I just say fair. Not good or bad, I think you write very fairly and very fair reports about the great job that all of us are doing– that this group behind me is doing,” President Trump continued. (Continued Below)

“It’s so insulting when they write phony stories that they know are fake news because they’re not insulting me, they’re insulting everybody– these incredible people that have worked so hard, so long that are thinking about nothing other than this invisible enemy. They have done such an incredible job. And they will continue, and we are going to win and there will be a lot of celebration when we win. And we’re gonna win with as few lives lost as possible. That’s the game. … It’s a tough enemy it’s a tough killer,” the Commander in Chief stated.

“Far bigger, far more vicious than ever before. But I appreciate you saying it, because the fact that we closed so early to China. … I was called xenophobic by sleepy Joe Biden. I was called a racist by Democrats. A racist, I was called a racist because I decided I didn’t want to have people that could hurt our country come in. … Saving of those many weeks was a tremendous thing. And when they keep talking about acting early, that was the ultimate act. That was the biggest act. And then, I also closed Europe early,” the president said. “And I took a lot of heat for that too.”

“I didn’t act late, I acted early. I acted far before anyone thought I should be. I took tremendous criticism from the various papers. I very much appreciate the question,” he added. (Video Below)

“I love whoever you work for ..This is a very nice question”

President Trump on the Washington Post..They write inaccurately about me every single day, every single hour…#Coronavirus pic.twitter.com/WkcnIpFWBR

President Trump points out that he was called ‘Xenophobic’ by Joe Biden and ‘Racist’ by Democrats for restricting travel with China back in January.