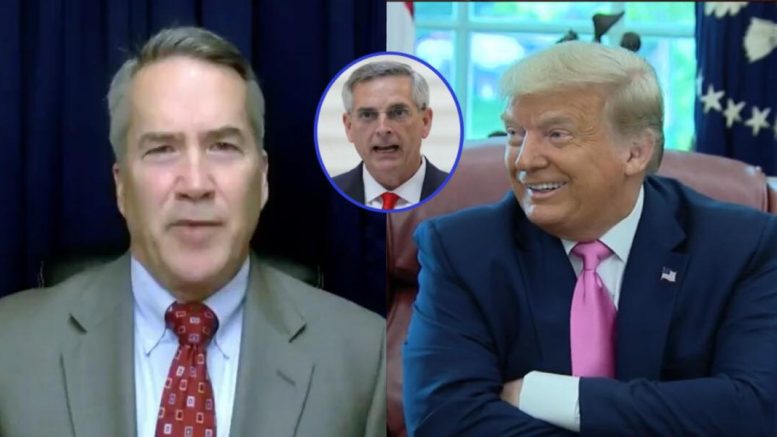 Congressman Jody Hice (R-GA) announced on Monday that he is campaigning for Secretary of State in the state of Georgia to oust Brad Raffensperger.

“It’s official! Free and fair elections are the foundation of our country, which is why I am excited to announce my campaign for Georgia Secretary of State. Together, we can renew integrity and secure our elections,” Rep. Hice tweeted on Monday.

Following Rep. Jody Hice’s announcement to run for Secretary of State for the Peach State, former President Donald Trump released a statement via email, declaring his “complete and total endorsement” for the Georgia congressman.

“Wow, just heard the good news. One of our most outstanding Congressmen, Jody Hice, has announced he is running for Secretary of State in the Great State of Georgia. Jody has been a steadfast fighter for conservative Georgia values and is a staunch ally of the America First agenda,” the 45th President said. Video Below

“Unlike the current Georgia Secretary of State, Jody leads out front with integrity. I have 100% confidence in Jody to fight for Free, Fair, and Secure Elections in Georgia, in line with our beloved U.S. Constitution,” President Trump noted.

“Jody will stop the Fraud and get honesty into our Elections! Jody loves the people of Georgia, and has my Complete and Total Endorsement,” Trump expressed.

.@CongressmanHice comments on Trump endorsing him for Georgia Secretary of state.

“We decided that this is the time for us to jump in…and we’re very grateful [for] the endorsement of the president.” https://t.co/VlT7z8drtO pic.twitter.com/CyRXKJlqEa

I am honored to have the endorsement of President Donald Trump! His priority has always been America first!

The 45th President has also announced his “complete and total endorsement” for Senator John Boozman (R-AR) along with Henry McMaster, the governor of South Carolina since January 24, 2017, Lieutenant Governor, Tim Griffin, who is running for Attorney General in Arkansas, and also for Republican Senator Mike Crapo of Idaho.

The 45th President recently endorsed former campaign adviser Bob Paduchik in the race to be the next chair of the Ohio Republican Party and former White House press secretary and close ally Sarah Huckabee Sanders in her gubernatorial bid for Arkansas governor.

Sen. McConnell: “Must Democrats Distaste For This President Dominate Every Thought That They Express & Every Decision They Make?”