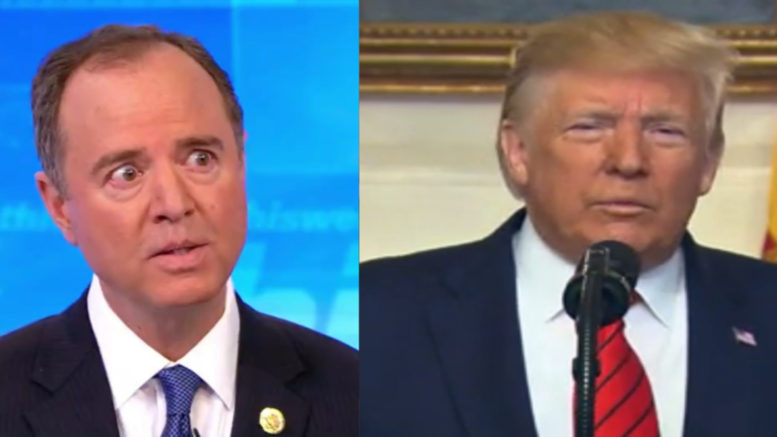 However, the President did not inform Congressional leaders of the top-secret mission and told reporters that Washington leaks. “We notified some, others are being notified now as I speak. We were going to notify them last night, but we decided not to do that because ‘Washington leaks like I’ve never seen before’. There’s no country in the world that leaks like we do and ‘Washington is a leaking machine,'” the Commander in Chief said.

The ISIS leader’s death came in a successful U.S. military operation in northwest Syria Saturday night that took roughly two hours. The Islamic State leader detonated an explosive vest as U.S. Special Operations Forces stormed his compound in the Idlib Province. Trump said he died whimpering at the back of a dead-end tunnel, as reported by Fox News.

“With this raid left on Baghdadi, you were not told. Was Nancy Pelosi given any sort of heads up about this?” Schiff was asked by Raddatz.

“My understanding is that she wasn’t,” Schiff replied. (Continued Below)

The California Congressman then quickly changed direction to praise the death of ISIS leader Baghdadi.

“You know a couple of things, good riddance. This was a bloodthirsty killer to the degree that he retained operational control of ISIS. It’s an operational success. It’s a symbolic victory. He had the blood of thousands of people on his hands, including many Americans and American journalists. This is a great day. A ruthless killer has been brought to justice. It’s not the end of ISIS by any means,” Schiff said.

Then, Schiff admitted, “In terms of notifying the ‘gang of eight’, that wasn’t done. Look the reason to notify the ‘gang of eight’, is frankly more important ‘when things go wrong’. … It wasn’t done here; I think it’s a mistake, but let’s not lose sight of the fact it was a success, and a ruthless killer has been taken off the battlefield.” (Video Below)

Adam Schiff’s official comments on not being notified:

(Related: Pres Trump On Why He Didn’t Inform All Congressional Leaders About Plan To Raid Baghdadi: ‘Washington Is A Leaking Machine’)

‘Trump Endorsed’ WY GOP Chairman Frank Eathorne Wins Reelection, 45 Reacts: “The People Of Wyoming Are Special & So Are You!”