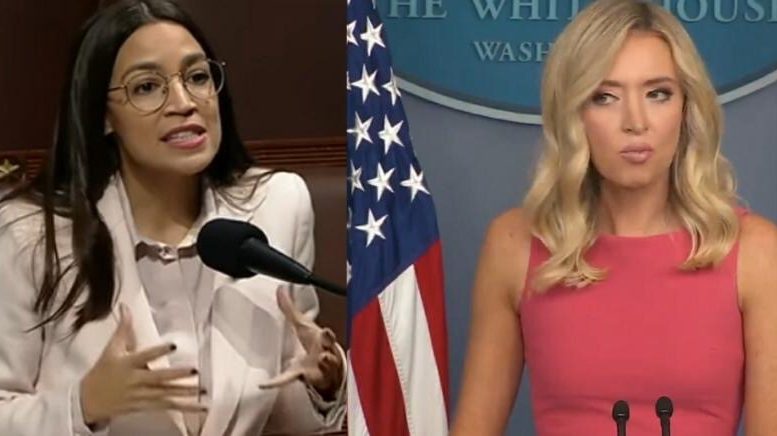 During Monday’s White House briefing, Press Secretary Kayleigh McEnany told the reporters that the president is “appalled” by the “defund the police movement”, and noted there are “sitting congresswomen”, who are also in favor of defunding the police.

After the presser, Rep. Alexandria Ocasio-Cortez (D-NY) accused the press secretary of “stripping” the congresswoman’s title at the briefing, but McEnany instantly fact-checked AOC.

“The fact that you have sitting congresswomen wanting to defend the police– notably Rashida Tlaib; notably Biden advisor AOC Alexandria Ocasio-Cortez; former Clinton and Eric Holder spokesperson Brian Fallon wanting to defund our police across this country– it is extraordinary,” Kayleigh McEnany expressed.

“And when you think the left has gone far and couldn’t possibly go farther, because we all remember the defund ICE movement, they wanted to defund immigration and custom enforcement, and now they want to defund the police? This is extraordinary. This is rolling back the protective layers that protect Americans in their homes and their places of business. He’s appalled by it, and it’s remarkable coming from today’s Democrat Party,” the press secretary said.

Rep. Ocasio-Cortez then retweeted Sherman’s post and accused McEnany of “stripping” her title at the White House press briefing. Continued Below

AOC tweeted: “@PressSec wouldn’t be the first person to mistake a women of color for having a lower position or title than she does, but Kayleigh – in case you haven’t picked up a newspaper in two years, I’m a Congresswoman.”

“The @PressSec comment is steeped in a long, hurtful, & horrendous history of stripping women of color of titles and diminishing them to ‘the help.’ Perhaps she isn’t aware that what she did is mired in racist history. If that is the case, I look forward to her apology tomorrow,” Rep. Ocasio-Cortez added.

The White House press secretary instantly fact-checked the New York Congresswoman on Twitter, saying: “Read the transcript, Congresswoman @AOC”, and included a readout of her statement. Video Below

Here are a few examples in which Press Secretary Kayleigh McEnany was referring to: