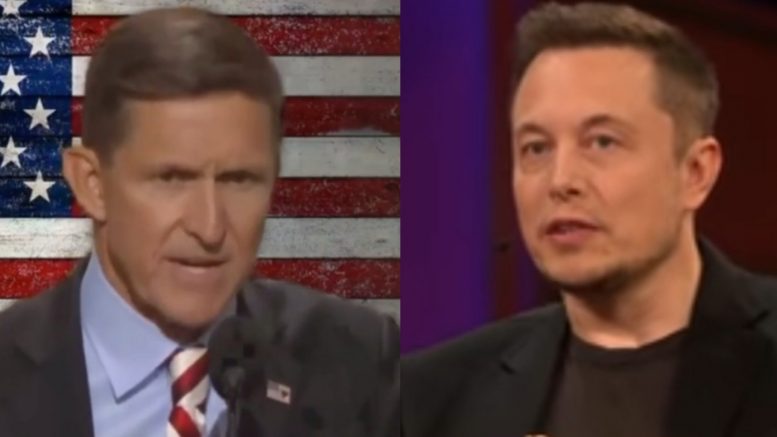 Michael Flynn wrote a letter to Elon Musk in response to news that the Tesla CEO is offering to buy Twitter for $43 billion, so it can be “transformed as private company.”

In a statement posted to Telegram, the retired Army Lt. General called out Twitter over their censorship operation and openly wished for Musk to succeed in acquiring the tech giant “because your success is part of the victory we all need for humanity.” Flynn included a tweet referencing a filing made by Special Counsel John Durham indicating the presence of a Russian-made phone that was allegedly used by Donald Trump’s opposition to spy on the 45th President before and after the 2016 election.

Here is Flynn’s fully transcribed letter as seen on Telegram:

I was censored from Twitter on the exact same day as President Trump (hmmm, I wonder why?). I likely said (to many times) the presidential election of 2020 was an election filled with fraud (yes it was) and I probably used the phrase God Bless America once too often (yes I did). For the soulless people at twitter, that may have confused them…I’m NOT sorry about that.

Well this tweet below from @Techno_Fog (a great patriot and seriously smart legal scholar) is all part and parcel of the reason they try to hide from the truth. They figure if they ban speech from people they fear, we will all dry up and go away. Maybe you can’t do anything about twitter (it really doesn’t matter). There is an army of digital soldiers (information warriors) that exist and despite the challenges of the undeniable assault on free speech, these warriors of truth have been on the march across all other forms of social media and cannot be stopped. We own the information space of free speech. This is our high ground and we will not cede it to a bunch of arrogant flakes who think they own the world.

I want you to succeed because your success is part of the victory we all need for humanity. Freedom is a human trait. Faith is an even deeper human trait and emotion. I have both.

These thugs involved in the treason against all Americans, not just Trump and myself must be held to account. That accounting should come on earth but if it doesn’t come in this life, it will come as they all enter the gates of hell.

What we’ve learned because we’ve fought for the truth to come out is that this is beyond corruption. Who’s kidding who. This group planned and staged a coup of America and think they got away with it. Not so fast.

So Elon, good luck with whatever your plans are for twitter (twitter no longer matters as much as it use to—but with the right leadership at the helm…).

We respect what you’re doing, your battle is a noble one and we applaud what you have achieved so far in this struggle for freedom.

“Techno Fog (@Techno_Fog) Tweeted:
We’ve previously reported that they targeted the Executive Office of the President AFTER Trump was elected.

CIA notes of the Sussmann meeting confirm this.

They extracted and manipulated data from the Executive Office of the President during the transition.”

We've previously reported that they targeted the Executive Office of the President AFTER Trump was elected.

CIA notes of the Sussmann meeting confirm this.

They extracted and manipulated data from the Executive Office of the President during the transition. pic.twitter.com/LocHAiMgG1

Yes, This would be Treason!”

Nadler Calls For ‘Federal Review by DOJ’ After Rittenhouse Not Guilty Verdict, Instantly Gets Ratioed