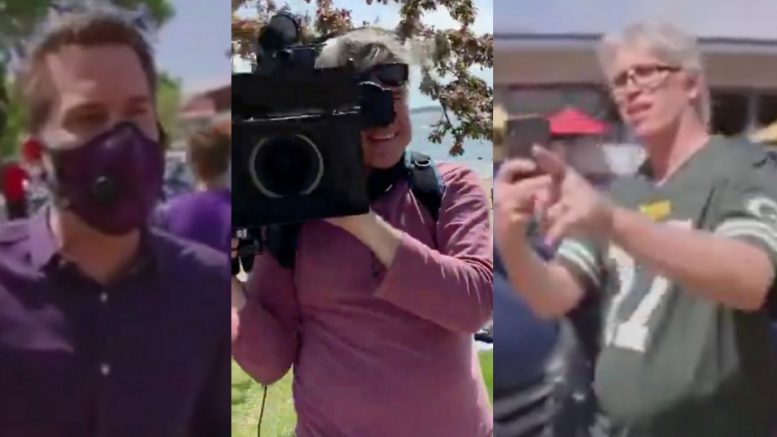 MSNBC correspondent Cal Perry and his crew got exposed by a passersby on Tuesday during a report about mass amounts of Wisconsin citizens not wearing masks in public.

Perry indicated concern that people walking the streets weren’t wearing masks, when suddenly, one man called out the reporter’s cameraman and other crew members not wearing one.

“I haven’t met anybody who is,” Perry replied before mentioning that “nobody” is wearing masks.

“As you can see here, nobody’s wearing [masks],” he said while the camera panned to a bystander in a Green Bay Packers jersey who added, “Including the cameraman. Half your crew’s not wearing them.” Video Below

REPORTER: "I haven't met anybody who is… you can see here, nobody's wearing them [masks]."

GUY ON STREET: "Including the Cameraman." pic.twitter.com/h9HbbIqNVh

Footage uploaded to Twitter appears to show what the unidentified man captured on his smartphone:

In ending, here’s a clip of a passerby telling MSNBC’s crew to “Go home”:

In the same segment, one passerby told the Karening reporter to "go home" pic.twitter.com/8pghaZLiM2

MI Sec. Of State Urges County Clerks Not To Give Access To Voting Equipment & Records If Audit Is Ordered