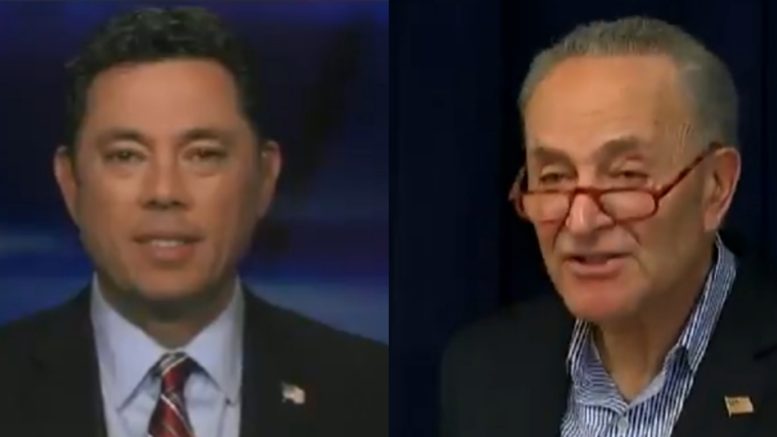 While appearing on Justice With Judge Jeanine Jason Chaffetz responded to those who have criticized President Trump’s coronavirus strategy each step of the way since the origination of the outbreak.

Chaffetz insisted that actions President Trump took early on may not have been “palatable” to his critics, but “thank goodness” he has taken such measures because the death toll and those infected in the U.S. could be much higher.

“Thank goodness President Trump has been ahead of the curve each step of the way,” Chaffetz said. “It was not politically correct. It was not palatable to the mainstream media and the Democrats for the President to limit travel from China before this Wuhan Virus, or however you want to refer to it, was out there in the public consciousness and yet he did it.”

He continued, “The fact that they are now introducing these public, private partnerships — that didn’t happen by flipping on a switch. It happened because they laid the groundwork for months beforehand and then they were able to execute on it.”

“So, there will be a lot of criticism of a president, but there’s a reason why our death toll and those affected is so much smaller, especially as a percentage from so many of these other countries who didn’t take these types of actions,” Chaffetz declared. Video Below

.@jasoninthehouse joined me to give some perspective on some of the steps the administration has taken during the coronavirus pandemic. pic.twitter.com/Pp4O85Upe4

At the end of the interview, Chaffetz reacted to Senate Minority Leader Chuck Schumer, who suggested President Trump has just “gone along with what Congress wanted” and hasn’t been telling the truth throughout the process.

“I do give a lot of credit to Kevin McCarthy for getting rid of what the Democrats wanted to do by adding things like abortion provisions and that sort of thing. They got those out of there in the House and the President is willing to sign what I think was absolutely needed,” he concluded.