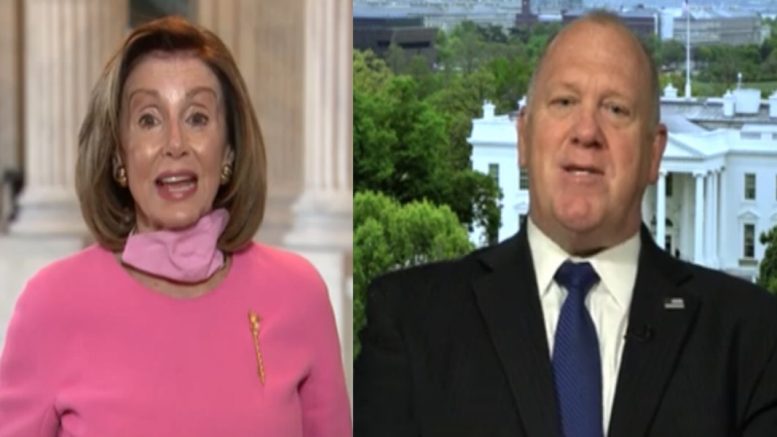 This comes as House Democrats unveiled on Tuesday, a $3 trillion coronavirus bill, the biggest and most high-priced aid package yet in regards to the global pandemic.

“She wants to use taxpayer money to pay illegal aliens who committed a crime by entering the country illegally [and] there in violation of the law for working in this country illegally,” Tom Homan said.

Homan also said that Pelosi’s stimulus package would give employers “a pass” for the crime of hiring illegal immigrants.

The $3 trillion coronavirus relief package released by House Democrats this week, includes protections for illegal immigrants who work in jobs declared “essential” — a move that Republicans are blasting as an attempt at “amnesty.” The mammoth bill includes a section on page 1,737 on “temporary protections for essential critical infrastructure workers.”

That section of the bill allows some illegal immigrants — who are “engaged in essential critical infrastructure labor or services in the United States” — to be placed into “a period of deferred action” and authorized to work if they meet certain conditions, Fox reported.

It also grants protections to those employers who hire illegal immigrants, stating that “the hiring, employment or continued employment” of the defined group of illegal immigrants is not in violation of the Immigration and Nationality Act, noted Fox News.

Furthermore, the Democrats’ $3 trillion coronavirus relief legislation expands direct payment eligibility to many more people than last time, including undocumented immigrants who pay taxes. Each eligible person would receive $1,200 stimulus checks, up to $6,000 per household, according to the newly released legislation. Video Below

Homan said that Pelosi, for three years, argued that President Trump acts as though he is “above the law”, adding: “But, apparently, in her eyes, illegal aliens are above the law.”

“I don’t know what the color of the sky is in her world, but she’s lost her mind on this stimulus package,” he added.

Tom Homan’s full comments, his remarks on the stimulus bill begin at 1:55 into the video:

(Related: In A Heated Exchange, Tom Homan Puts Dem Committee Chairwoman In Her Place: ‘You Work For Me!)

Hillary Implies the GOP Is Responsible for the Attack on Paul Pelosi, Elon Musk Reacts: ‘There Might Be More to this Story’