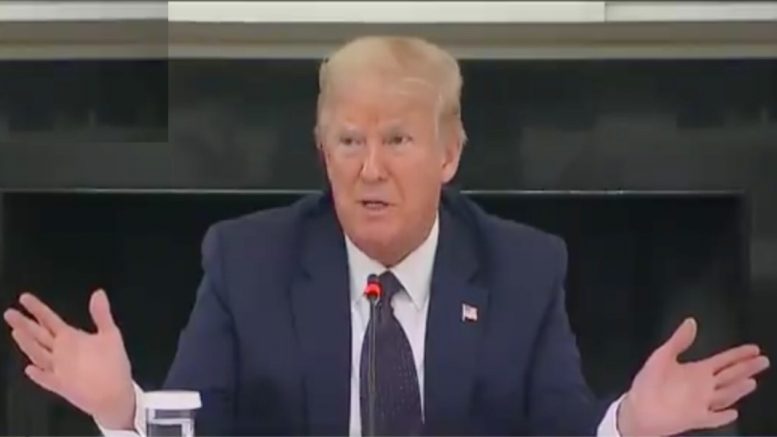 President Donald Trump on Monday revealed to reporters that he’s been taking Hydroxychloroquine for about two weeks for a preventive measure for COVID-19. The announcement came during a roundtable with restaurant leaders in the White House’s State Dining Room.

Hydroxychloroquine is used to treat malaria, lupus, and other diseases.

Trump continued: “And if it’s not good, I’ll tell you right– I’m not gonna get hurt by it. It’s been around for 40 years for malaria, for lupus, for other things. I take it. Frontline workers take it, a lot of doctors take it. I hope to not be able to take it soon because I hope they come up with some answer[s]. But I think people should be allowed to.”

The President said that the White House physician “didn’t recommend” the treatment but offered it to him. He also told reporters along with taking the drug, that he is being tested for COVID-19 every couple of days, but so far has tested negative. Continued Below

In April, the FDA, however, cautioned against the use of hydroxychloroquine or chloroquine for COVID-19 outside of the hospital setting or a clinical trial due to the risk of heart rhythm problems.

“The FDA is aware of reports of serious heart rhythm problems in patients with COVID-19 treated with hydroxychloroquine or chloroquine, often in combination with azithromycin and other QT prolonging medicines.  We are also aware of increased use of these medicines through outpatient prescriptions,” according to the FDA.

BREAKING: President Trump says he has been taking Hydroxychloroquine.

“You’d be surprised at how many people are taking it… I happen to be taking it.” pic.twitter.com/DMW0i145OF

(Related: Former NFL Player Mark Campbell On His Battle With COVID-19: Hydroxychloroquine ‘Worked Great For Me”)