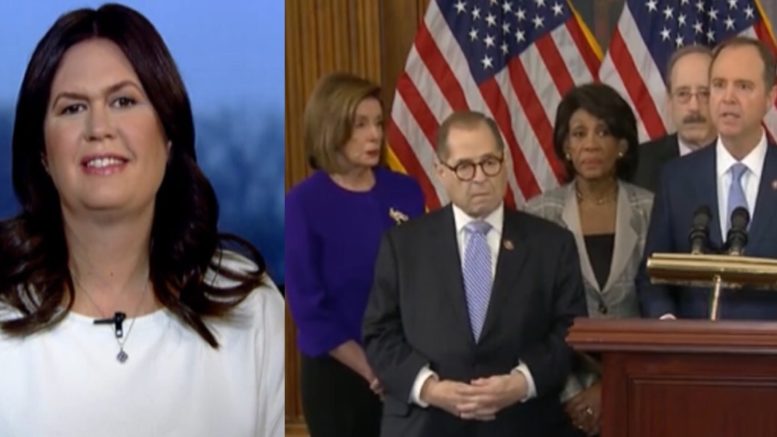 The committee’s articles allege “abuse of power and obstruction of Congress”, and the vote was a straight party-line vote of 23-17. A final roll call in the full House is expected next week.

“Look, I think this whole thing has been a huge waste of time from the beginning. What happened today was predictable, and I think it’s a disgrace to members to members of Congress across the board,” the former White House press secretary said.

“I think it’s a terrible thing for the country that they have used the impeachment tool and process– something that should be held for really big things to protect the presidency. And what they’ve done, if anyone is abusing power, it’s the members of the House Democrats, who are abusing this power and using impeachment as a political tool instead of what it is meant to be,” Sanders believes. [Emphasis added].

Sanders noted that at the end of the day if it moves to the Senate, President Trump will be vindicated. (Continued Below)

“At the end of the day, the President did nothing wrong and they are grasping at straws on trying to figure out how they can impeach him. It’s exactly like Nancy Pelosi said last night, they’ve been working on this for two and a half years. She made that loud and clear that this had nothing to do with the Ukraine call and everything to do with trying to take out a President they simply don’t like,” Sanders continued.

“That’s not what the impeachment process is about, and frankly, the American people are smarter and better than that. And I think that’s why you’re seeing such a shift in the polls in the President’s favor,” she added. (Video Below)

Sanders concluded by saying that she would like to see a quick process in the Senate if impeachment moves out of the House.

“It’s a huge waste of time. I think if we can get this over with, be done with it, nothing was done wrong. I think we saw all of that play out in the House process,” Sanders said, adding that she doesn’t want to see “another ridiculous witchhunt that we’ve wasted so much time on over the last two and a half years.”

(Related: Lou Dobbs On Impeachment: “It Is Going To Be A Stain On The Record Of The Radical Dems”)