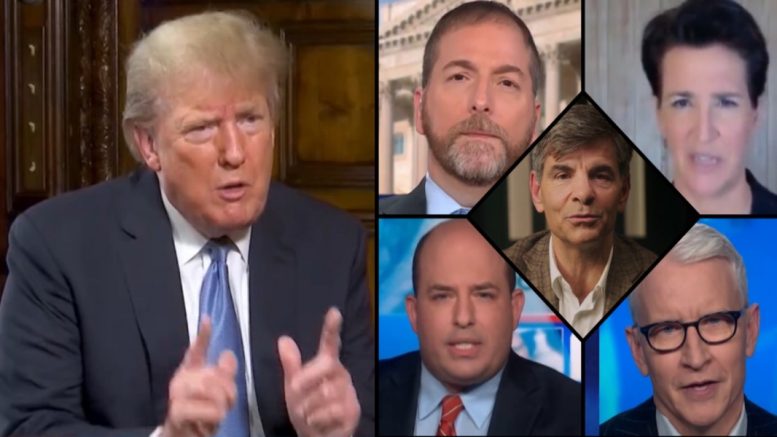 45th President Donald J. Trump issued an email statement on Monday accusing the legacy media of being “corrupt” and “shameless” for their lack of coverage on new allegations filed on February 11, 2022 by Special Counsel John Durham.

Durham filed the government’s motion to inquire into potential conflicts of interest in the Michael Sussmann case, which alleges Hillary Clinton’s 2016 campaign paid a tech company to “infiltrate” Trump Tower and White House servers in a bid to establish a link to Russia.

“Can you imagine that, what should be the biggest story of our time, bigger than Watergate, is getting absolutely no mention, ZERO, in the New York Times, Washington Post, ABC Fake News, NBC Fake News, CBS Fake News, ratings-dead CNN, and MSDNC,” President Trump said from his “Save America” PAC.

“This in itself is a scandal, the fact that a story so big, so powerful, and so important for the future of our Nation is getting zero coverage from LameStream, is being talked about all over the world. Just like they wouldn’t talk about the many Biden corruption scandals prior to the Election, (or for that matter now!), they won’t talk about this, which is potentially even bigger. It shows how totally corrupt and shameless the media is,” he pointed out.

“Can you imagine if the roles were reversed and the Republicans, in particular President Donald Trump, got caught illegally spying into the Office of the President? All hell would break loose and the electric chair would immediately come out of retirement,” Trump suggested.

“The good news is, everybody is talking about not only this atrocity against our Nation, but that the press refuses to even mention the major crime that took place,” the 45th President added. Continued Below

Durham’s filing revealed how Clinton’s election campaign paid money to a tech firm to “infiltrate” servers that were at Trump Tower, and later the White House. According to a filing from Special Counsel John Durham, the aim was to try and smear Trump by linking him to Russia, which had been accused of meddling in the 2016 U.S. Presidential Election.

According to Durham, Joffe and his associates exploited internet data from “the Executive Office of the President of the United States” to further their own political agenda. They had come to possess this data as part of a “sensitive arrangement” with the U.S. government. Continued Below

“Can you imagine that, what should be the biggest story of our time, bigger than Watergate, is getting absolutely no mention, ZERO, in the New York Times, Washington Post, ABC Fake News, NBC Fake News, CBS Fake News, ratings-dead CNN, and MSDNC.. pic.twitter.com/QabwKUiYIQ

"Could somebody please inform the low-rated political shows that plague our Sunday morning programming that my Endorsement of candidates is much stronger today than it was even prior to the 2020 Election Scam. I am almost unblemished in the… pic.twitter.com/s2oYFIsWPg

"THEY SPIED ON THE PRESIDENT OF THE UNITED STATES!" pic.twitter.com/95UnB1k21B

"What Hillary Clinton and the Radical Left Democrats did with respect to spying on a President of the United States, even while in office, is a far bigger crime than Watergate. It will be interesting to see how it was covered by the media and… pic.twitter.com/a80zx3KJXc

(Related: ‘Indisputable Evidence’: Trump Declares After Durham Reveals DNC Allies ‘Exploited’ DNS Traffic to Gather Intel on the ‘Executive Office of the President of the U.S.’)

Don Lemon Grumbles About ‘How Difficult It’s Been As A Journalist’, Instantly Gets Blasted