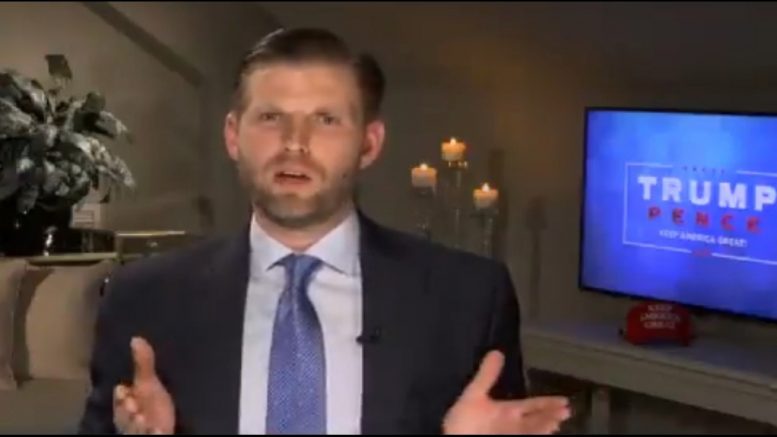 As America is slowly and carefully working its way to fully reopening, Eric Trump thinks there are many people on the Democrat side who are trying to “milk” the coronavirus pandemic “for everything the can” in order to hurt President Trump.

Eric gave his assessment of the situation while appearing on Saturday’s airing of Justice With Judge Jeanine.

He continued, “You have these Democrats, they come up with these names for these various bills, right. You have the HEROES Act. It sounds beautiful until you start discovering some of the garbage that they put in it, like every state in the country has mail-in voting. And I mean, it’s really, really disingenuous. The Democrats are trying to milk this for everything they can, and it’s sad.”

Then after bringing up the importance of restarting America’s economy, including all small business, Eric said, “It’s ridiculous what [Democrats are] trying to do, and it’s gonna be stopped.”

“They think they’re taking away Donald Trump’s biggest tool, which is being able to go into an arena and fill it with 50,000 people every single time,” he added. “So they will, and watch…they’ll milk it every single day between now and November 3rd and guess what? After November 3rd, coronavirus will magically, all of a sudden go away and disappear and everybody will be able to reopen.” Video Below

“They’re trying to deprive him of his greatest asset, which is the fact that the American people love him, the fact that he’s relatable, the fact that he can go out there and draw massive crowds,” Trump proclaimed. “Joe Biden can’t get ten people in a room. My father is getting 50,000 in a room, and they want to do everything they can to stop it.”

Executive Vice President of the Trump Organization and the son of the president @EricTrump Trump joins “JUSTICE” tonight to react to my opening monologue and much more. Take a look. pic.twitter.com/bnn6QF2y4j