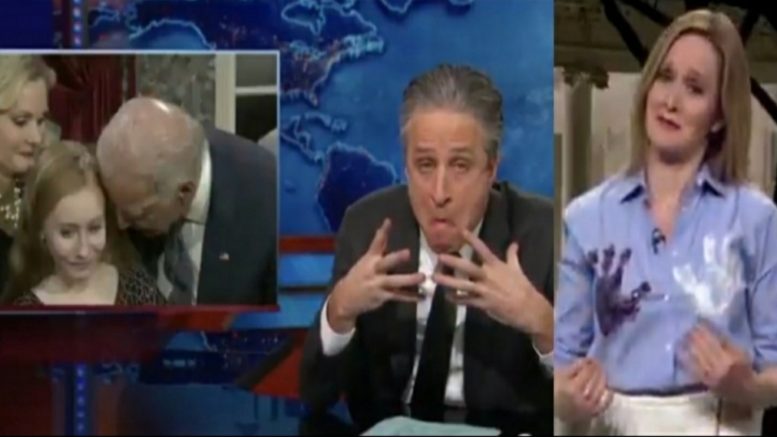 As the controversy surrounding Joe Biden and his former staffer Tara Reade has made its way front and center, an old video from Comedy Central’s Daily Show featuring left-leaning comedians Jon Stewart and Samantha Bee has resurfaced, where the pair take turns bashing then-Vice President Biden over some of his questionable manuevers with females at a Senate swearing-in ceremony.

During the 2015 ceremony, Biden was seen nudging up close to women of all ages, which Stewart couldn’t help calling out.

After playing a clip of Biden whispering in a young girl’s ear and kissing her, Stewart pretended to put hand sanitizer in his eyes and yelled, “Ahhh! I can still see it! What could you possibly be saying to her?!”

Stewart continued to mock the former Vice President before concluding, “Biden is actually very good on women’s issues in general…it’s moments with actual women he seems to have a problem with.” He then handed it off to the so-called “Senior White House Correspondent” Samantha Bee.

With red and white handprints on the breast area of her shirt, Samantha joked that she just got done with a one-on-one interview with Biden, who “had just finished writing ‘I will not grope women’ on a chalkboard” and was eating strawberry preserves.

As she turned around, two more handprints were seen on Bee’s backside, which she insinuated were also there because of Biden. Video Below

Democrats were warned about Biden back in 2015 on Comedy Central.

In ending, here’s video of CNN’s Jeanne Moos calling out Biden’s odd behavior around women, particularly at the swearing-in ceremony:

Related Article: Jesse Watters: “Joe Biden, Why Don’t You Agree To An FBI Investigation? Because If You Don’t, You’re Obviously Guilty”

Jesse Watters on Biden’s Press Conference: ‘Like the Media Giving Him a Political Field Sobriety Test That He Failed’