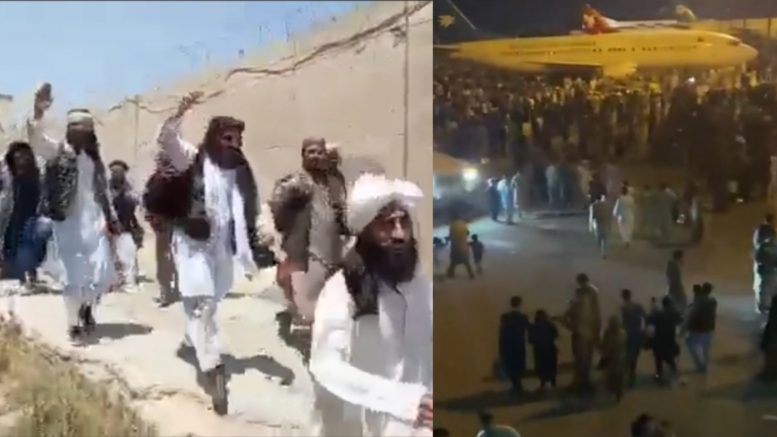 A video circulating on social media appears to show several Taliban prisoners being released as the terror organization is on the brink of taking over Afghanistan.

Investigative journalist Sara Carter uploaded the video to her social media account on Sunday, citing that she obtained the footage from one of her sources close to the situation.

My source sent me this video of all the Taliban prisoners being released … this is #BidensAfghanistan Terrorists that many of our troops and Afghan troops captured free to start terror training camps again pic.twitter.com/XX4L7noBC5

Meanwhile, videos captured chaotic scenes at Hamid Karzai International Airport in Kabul and other areas inside Afghanistan on Sunday as thousands of people tried to flee the wrath of the Taliban.

This is going to haunt us forever … nightmares – pray for our friends https://t.co/JGy6c5fHKj

Early Monday morning in Kabul. Stuck between the Taliban’s rampage and the U.S.’ suspension of commercial flights from Kabul Airport, Afghans trying to make their way into the airport. #Afghanistan #Talibans pic.twitter.com/IeRglhCDD5

Another Saigon moment: chaotic scenes at Kabul International Airport. No security. None. pic.twitter.com/6BuXqBTHWk

“Taliban have entered the city and we are running away. Everyone is afraid.”
This is not a clip from a scary movie, This is the reality in Kabul. Last week the city hosted a film festival & now they running away for their lives. Heartbreaking to watch but the world is do nothing pic.twitter.com/90PzxqLPYE

Joe Biden has since been under fire for taking a break at Camp David as the Taliban continues to overrun Afghanistan. The swift action by the the terror organization comes just weeks after Joe Biden announced his plan to withdraw all troops from the country by the end of August.

Where is Joe Biden?

Does Joe Biden even want to be President any more? #WheresBiden

Other critics were alarmed to find out White House Press Secretary Jen Psaki plans to take a week off in wake of the chaos.

To follow in her Boss's footsteps, Jen Psaki will be avoiding her job and taking ALL OF NEXT WEEK off… You really can't make this shit up 🤦🏾‍♀️ This administration is literally running away from their responsibilities. What a joke and an embarrassment these people are

World watches a collapse of 20 yrs of US involvement in Afghanistan and WH takes vacation. I guess she will “circle back.” Jen Psaki 'out of the office' as Biden remains silent on Taliban takeover of Afghanistanhttps://t.co/vssOFhuB9U

Sen. Kennedy: ‘The Price of Gas Is so High that It Would Be Cheaper to Buy Cocaine & Just Run Everywhere’