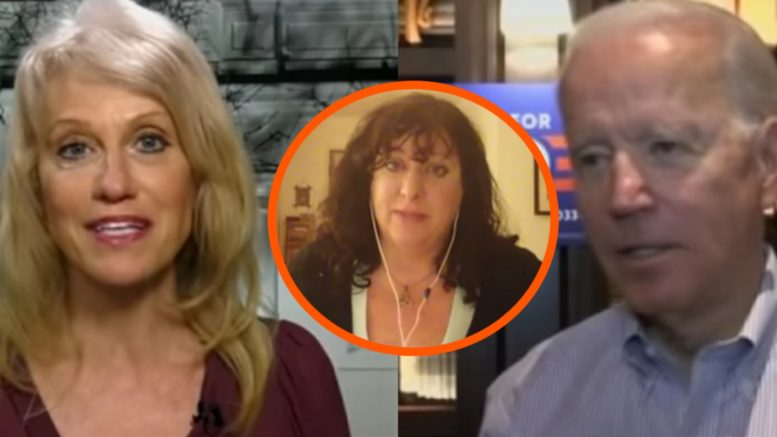 While appearing on Saturday’s airing of Justice With Judge Jeanine, Kellyanne Conway gave her take on the latest revelations regarding former Joe Biden staffer Tara Reade’s allegation against the former Vice President.

Newly-uncovered video evidence appears to support former Reade’s accusation that the former Vice President sexually assaulted her in 1993 within the Senate corridor.

Meanwhile, forces of the left have paid rather little attention to Reade’s claims, which Kellyanne finds “hypocritical” and “disingenous”. However, she does think there are some in the Democratic party who may use it as an opportunity going forward to push Biden out of the race.

“How do you think the Democrats can actually look at themselves when they are so critical of Republicans with no evidence, and they’ve got the guy who’s running for president, who’s being accused of sexual harassment, if not worse?” Judge Jeanine asked.

Kellyanne replied, “Two things going on here, neither of which is good for the Democratic party, Jeanine.”

“The first is the obvious. The whole Me Too movement — the people who actually believed this person or that person with very thin or no evidence — because of their political leanings and because they were trying to stop from the Supreme Court or from the presidency. They are not on solid ground here. They’re being completely disingenuous amd hypocritical by not even giving this woman her due,” she asserted. Video Below

“The second part is, you know a lot of Democrats tried to push Joe Biden out of the race,” Kellyanne continued. :They didn’t want him to be the nominee. Now that they’re stuck with him, and they’re using this as a backdoor excuse to maybe call into question, ‘Can we afford…. this kind of possible scandalabra into the election.”

“And, you know, Biden in hidin’ has really helped him, and when he comes back out, he’s gonna have to debate Donald Trump and answer questions about Tara Reade and other people,” she concluded. Video Below

Psaki: ‘We Need to Reduce our Dependence on Foreign Oil, on Oil in General & Need to Look at Other Ways of Having Energy in our Country & Others’