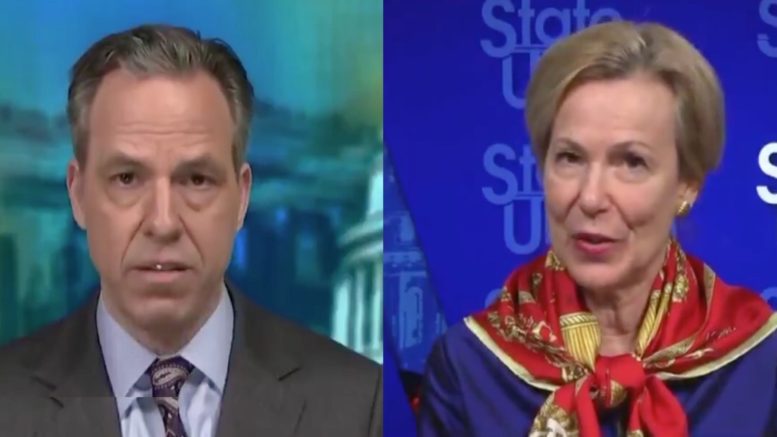 During Thursday’s Coronavirus Task Force briefing, Bill Bryan, the head of the science and technology directorate at the Department of Homeland Security, presented the findings of the federal government’s study on sunlight, humidity and temperature’s effect on the coronavirus — as well as various disinfectants on the virus when it is on surfaces.

The president reacted to Bryan’s comments, suggesting that light and disinfectants may have the potential to treat COVID-19. However, the media and some Democratic lawmakers took the president’s remarks “out of context”, according to White House press secretary Kayleigh McEnany.

Dr. Deborah Birx spoke with host Jake Tapper on CNN’s “State of the Union” Sunday, slamming the mainstream media for their ongoing coverage of the president’s “disinfectant remarks”.

“As a doctor, doesn’t that bother you that you have to spend any time discussing this?” Tapper asked Dr. Birx, referring to the president’s remarks.

“It bothers me that this is still in the news cycle,” Dr. Birx fired back. “Because I think we’re missing the bigger pieces of what we need to be doing as an American people to continue to protect one another.”

“And we should be having that dialog about asymptomatics. We should be having that dialog about this unique clotting that we’re seeing. You know, we’re the first country that really had young people to this degree– Italy and Europe is about 8 years older than us, as a media age. So this is the first experience of this virus in an open society where we can really understand what’s happening to every different age group,” she explained. Continued Below

(Related: Reporter Asks: ‘You’re Not Encouraging Americans To Inject Disinfectant?’, Trump Reacts: “No, Of Course, Not. …It Was Said Sarcastically”)

“These are the things that we should be talking about and focusing on,” Dr. Birx suggested. “I think as a scientist and a public health official and a researcher, sometimes I worry that we don’t get the information to the American people that they need when we continue to bring up something that was from Thursday night,” Dr. Birx said.

“I think I’ve answered that question, the president made it clear that physicians had to study this. I think I’ve made it clear that this was amusing as you just described, but I want us to move on to be able to get information to the American people that can help them protect each other and also help them understand how devastating this virus is to different age groups and different symptoms comorbidities,” she added. Video Below

“It bothers me that this is still in the news cycle,” Dr. Deborah Birx says about Pres. Trump’s disinfectant remarks. “I worry that we don’t get the information to the American people that they need when we continue to bring up something that was from Thursday night" #CNNSOTU pic.twitter.com/eu9n1jCVkO

Interesting information about how increased temperature, humidity, and solar light are detrimental to Coronavirus in saliva droplets. pic.twitter.com/pSH43LT3gn

Related: Trump Stumps Reporter As She Grills Him Over His Initial Response To The Crisis: “How Many Cases Were In The U.S. [When] I Did A Ban?”)