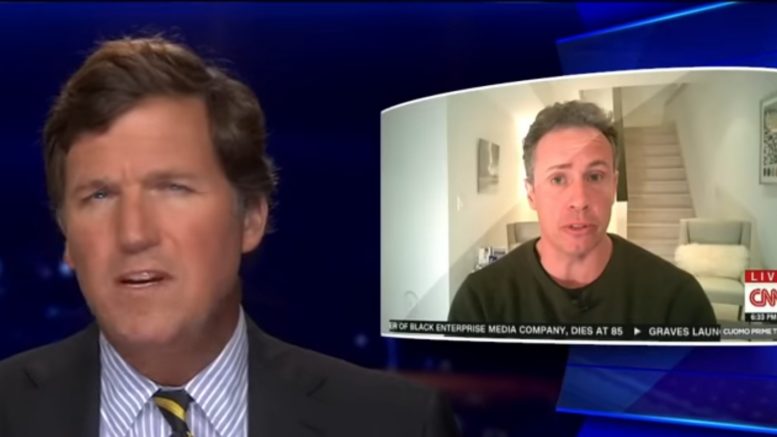 Fox News host Tucker Carlson called out CNN’s Chris Cuomo on Tuesday in regards to the “re-emergence video” that Cuomo aired on his Monday night program.

Cuomo suggested over the past couple weeks that he was sick and in very strict containment since testing positive for COVID-19. However, suspicions were raised if he was really following quarantining guidelines after a bicyclist allegedly spotted and “harassed” Cuomo for congregating outside his home while supposedly being infected. Cuomo later admitted to the confrontation on a radio program.

In regards to his alleged spat with the bicyclist, Cuomo said last week, “I don’t want some jackass, loser, fat tire biker being able to pull over and get in my space and talk bulls— to me, I don’t want to hear it.”

Oddly enough, on Monday Cuomo aired a video of himself making a dramatic re-emergence from his basement and saying how great it was to finally be out of quarantine after the CDC cleared him…just days after he admitted to already being outside of his home.

Before re-playing the video, Tucker said, “CNN, the Cheez Balls that they are, celebrated by filming Cuomo rising like a buff news Lazarus from the grave and back into ordinary life.”

“When did journalists start talking about themselves so much?” He questioned after playing the video. “It’s not a story, it’s narcissism and that’s weird enough but it’s not all, that was fake.” Video Below

Tucker continued, “Just last week, Cuomo admitted getting into a fight with a bicyclist who harassed him for going outside and congregating with other people, something CNN has been vilifying ordinary people for wanting to do.”

He then reeled audio of Cuomo venting about the incident. “That whole exchange seems kind of unpleasant, but there’s a scandal underneath it,” Tucker assessed. “Here you have a top CNN anchor who appears to have been ignoring the social distancing rules his network has been promoting and forcing upon everyone else.”

“It seems like he wasn’t telling the truth about being quarantined in his basement, which can’t be too mean — his own video was humiliating enough,” Tucker concluded. Video Below

In ending, here is a clip of Terrence Williams blasting Cuomo over his re-emergence video:

DID HE REALLY HAVE THE VIRUS ?

He said he had coronavirus but lied about being in the basement the whole time, lied about staying home and Broke Quarantine.

He Fought with an elderly man!

I DONT KNOW WHAT TO BELIEVE???