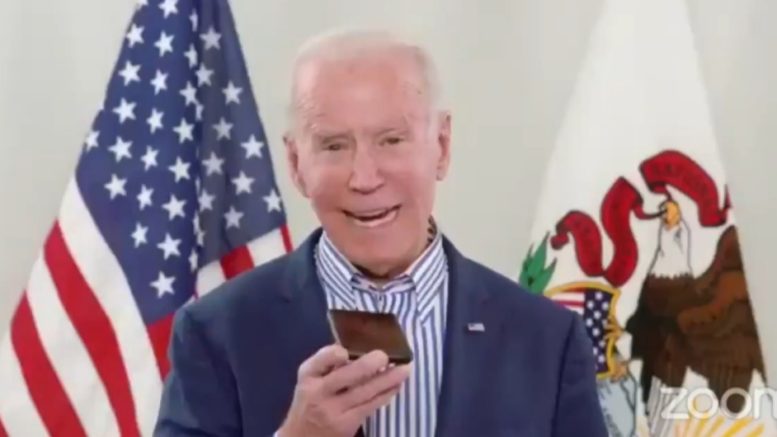 During his virtual town hall on Friday evening, Joe Biden struggled to determine when he would become President if elected.

The incident took place as Biden was taking a question from a voter in his first virtual town hall that media sources have labled as a “nightmare” spelled by “technical trouble”.

“But, even I can’t do that for another two year, another year between now and November, or actually January.”

Joe Biden has no idea when he would be president:

"But even I can't do that for another two year, another year, between now and November. Or actually January." pic.twitter.com/UO1EbpElRe

Biden has been plagued by several gaffes throughout his campaign, many of them dealing with time-related subjects.

On the Monday before Super Tuesday, Biden was on the verge of telling his rally crowd, “Tomorrow is Super Thursday” before correcting himself. While on other occasions, he struggled to name the rough time frame that historical events occurred, such as the assassinations of Robert Kennedy & Martin Luther King and when Georgetown, DE was founded. Videos Below

Here are some moments when Biden struggled with the concept of time:

This is a pattern:

Earlier this month, on a Monday, Joe Biden said, “Tomorrow is Super Thursday.”pic.twitter.com/0lWGlNE6kq

Last month, Biden said Georgetown, DE was founded in the 1600s when it was actually founded in 1791.pic.twitter.com/lWVOaynOcn

Also last month, Joe Biden confused the 2010 midterms with the 2016 election: “the reason why we lost the Congress in 2016 was because of Obamacare”pic.twitter.com/jjCw5Jv51l

Last September, Joe Biden forgot that Obama, not Bush, was “the last president.”pic.twitter.com/2eQhB6tNP8

Last August, falsely said that RFK, MLK were “assassinated in the ‘70’s, late 70” when both men were assassinated in 1968. pic.twitter.com/7sshfFGwqV

Jesse Watters: Dems Want to ‘Make You So Scared That They Control You’ & ‘Keep Us In A Forever Pandemic’