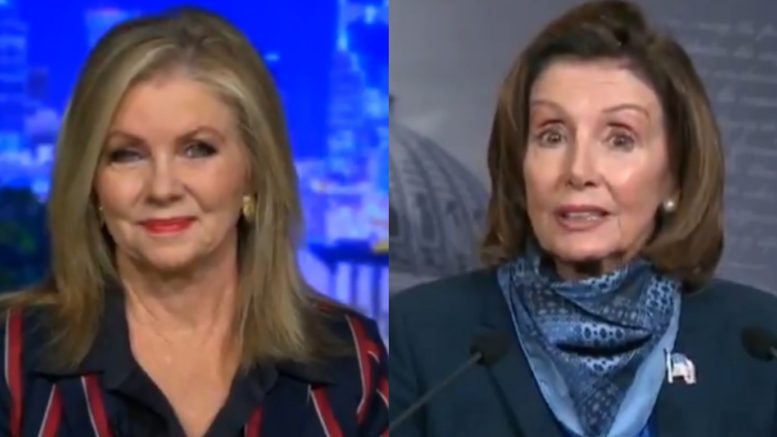 Senator Marsha Blackburn (R-TN) slammed House Speaker Nancy Pelosi just after the Senate moved to pass a bill that included additional funding for the Paycheck Protection Program, which has been out of money since last Thursday.

Pelosi claims that she has no fault in “holding up” funding for the small business program, and instead blames Republicans at the lead of Senate Majority Leader Mitch McConnell for why the $250 billion in additional aid was stalled.

In her “Morning Joe” interview on Wednesday, Pelosi said it was wrong for Senate Republicans to just focus on adding more funds to the PPP, which allows businesses to keep workers on the payroll during the COVID-19 pandemic, and placed the blame on Senator McConnell for the delayed funding.

“But again, Mitch McConnell likes to say that we delayed the bill. No, he delayed the bill,” she claimed. “Two weeks ago, he came to the floor and said, ‘This is all we’re doing. Just the 250.’ And Democrats were reunited, House and Senate, the Senate Democrats went to the floor and said, ‘No, no’ to that, we have a better idea about hospitals and testing, and more funds for all of the businesses, the lower– shall we say the unbankable small businesses.”

Last Tuesday, Pelosi congratulated Senate Democrats for blocking McConnell’s attempt to pass a “clean” bill by unanimous consent that would have simply boosted PPP funding by $250 billion before it ran out of funding. Democrats’ decision to block McConnell is what many have argued is the reason behind the delay in additional PPP money.

While interviewing on Fox News, Senator Blackburn blasted Speaker Pelosi for blaming Republicans over the delay in funding and appearing to being more concerned about showing off expensive pints of ice cream in her freezer instead of helping American businesses and workers who are struggling to make ends meet. Video Below

“For Nancy Pelosi to have held up the phase three package for five days, while she wanted to get money for the Kennedy Center, for the arts, for the humanities. And now she held up this package for a full week, knowing that the money had to be coming in and that fund was going to run out of money,” Sen. Blackburn indicated. “…And now she is trying to say that it wasn’t her fault at all?”

“She must have a PhD in revisionist history because she is at it at every turn,” she continued. “They despise President Donald Trump who has done a tremendous job leading our country through this effort. They will stop at nothing to diminish the work that he is doing. This is just more of their partisan politics, I really wish they would set aside and say, ‘We have worked together on this.'”

“There are other things we are going to need to address and a good attitude would go a really long way with the American people,” Sen. Blackburn declared. “I think, frankly, they are sick of seeing Nancy Pelosi and her $24,000 freezer and her $12 a pint ice cream because they know that this coronavirus has costed this nation six trillion dollars. We will probably lose another five trillion dollars through this. They know we are all in this together, they’re ready to go back to work and her silliness and games are not appreciated by the American people.” Video Below

While Pelosi was stocking up her fridge with ice cream, businesses were unable to make payroll. pic.twitter.com/b7aABP6Q64