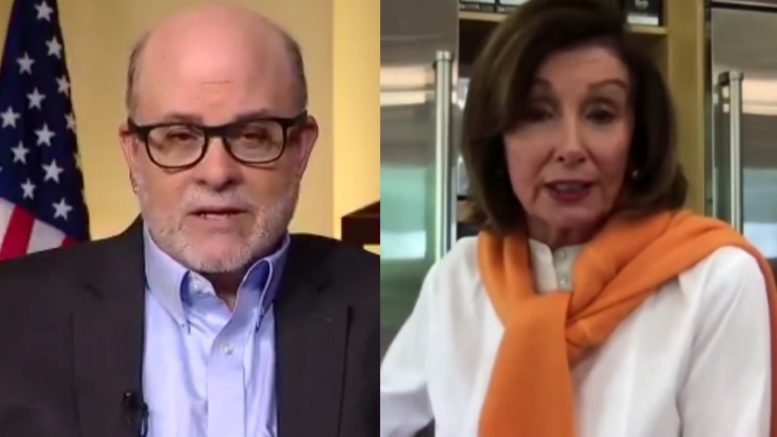 Political analyst Mark Levin slammed House Speaker Nancy Pelosi over her handling of the COVID-19 crisis after he watched a video that was compiled by the Trump campaign.

The one-minute and fifteen-second ad primarily targets statements Pelosi has made while small businesses and their employees were in limbo as the Paycheck Protection Program ran dry last week. Pelosi is seen showing off her freezer filled with $12 pints of Jeni’s ice cream, and congratulating Senate Democrats for initially blocking PPP funding, as clips of Americans, who are struggling to make ends meet, are inter-mixed.

Related Article: Sen. Blackburn Reacts As Pelosi Claims Delaying PPP Funding Wasn’t Her Fault: “She Must Have A PhD In Revisionist History”

“She is so out of it, it’s not even funny,” Levin said as the video finished playing. “And then she pretends to represent the little people.”

“She’s thrown in with the hard left socialists, she represents a city that is hard left and is deteriorating beyond description,” he continued. “And there she is in her Napa Valley estate, just having a grand old time, telling people who are out of work and businesses that are shut, ‘Well, too bad. Unless we get the money we want for all of the crazy ideas we have, it ain’t gonna happen.'”

“I’m telling you, it’s just horrible. And all the President and his team has to do is expose her, expose Biden, expose all of them,” Levin declared. Video Below

In ending here is another clip of Levin where he targets the media over their smears against President Trump:

The press does not have serious news anchors—they’re left wing bomb throwers.

The left and their fake news media machine have take their agenda too far and Mark won’t stand for it. Catch an all new episode tonight, on LevinTV! https://t.co/D9ovz3FUWI pic.twitter.com/B5EIfg6nsa