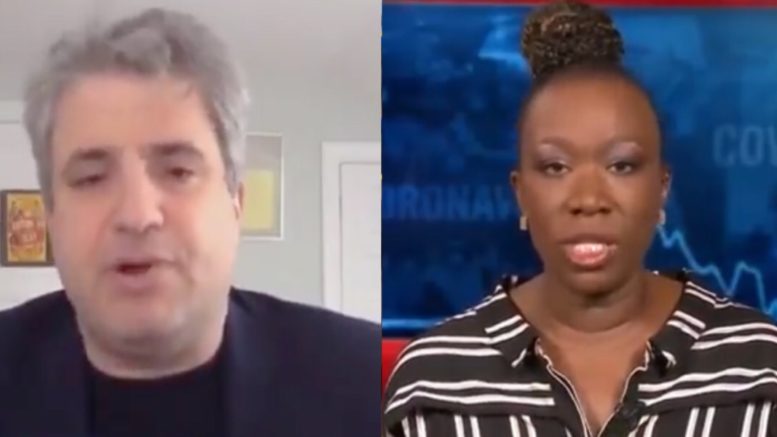 Sunday on MSNBC’s “AM Joy,” sports editor for “The Nation” Dave Zirin said on air that those who are protesting the stay-at-home orders are “the Fox News, Nazi, confederate death cult” of the Republican Party.

Host Joy Reid said of the protesters: “It’s a strange sort of civil rights-ish movement if that’s what they think it is.”

“They’ve gone from all lives matter to no lives matter. These folks are– let’s be honest of what they are– they are the Fox News, Nazi, Confederate death cult romp of the Republican Party,” Davin Zirin claimed, responding to Joy Reid’s comparison.

“Their very existence is a slap in the face, not only to the health care workers on the front lines risking their lives every single day, but also a slap in the face of the people who are actually dying from this virus in disproportionate numbers, black and brown people,” he said.

“These aren’t economically disenfranchised folks. These are small business owners, these are retirees. These are people who want their workers sent back to work, not themselves. It’s a complete and utter farce. It’s an astroturf farce,” Zirin continued.

“It needs to be said, it’s unrepresentative of the Republican Party as a whole. I just saw a poll that said 70% of Republicans want a national stay-at-home order. This represents nothing except for the narrow astroturf interests and the hard racist interests that combine and form the modern-day Republican Party,” he went on to claim. Continued Below

(Related: Joy Reid Ridicules ‘My Pillow’ CEO For Speaking At Briefing, James Woods Fires Back: “What Are You Doing, You Worthless Media Grub?”)

“I think this is important covering it critically, but I think the media as a whole would do well to cover it far less. I can’t tell you how many 100-person protests I’ve been to in my life and I’ve gotten zero media coverage. Meanwhile, this is something that sets off a national conversation when these folks don’t deserve the sweat off our brow,” Zirin added.

Reid agreed with Zirin’s claim saying: “You know that’s a good point because I remember during the Iraq war, there were a lot of protests against the war that you would never know happened unless you have CSPAN.” Video Below

"These folks are — let’s be honest of what they are. They are the Fox News, Nazi, confederate death cult rump of the Republican Party." pic.twitter.com/ZjaW0Jlg25

Protests and rallies have gained momentum across the country as unemployment continues to soar. More than 22 million people filed for unemployment over the past month since stay-at-home orders have forced most businesses to close in an attempt to stop the spread of coronavirus. Only essential businesses have remained open, as reported by Fox News.

During a news briefing Saturday, President Trump supported the protesters. “There are a lot of protests out there, and I just think that some of the governors have gotten carried away,” he said. “We have a lot of people that don’t have to be told to do what they’re doing. They’ve been really doing everything we’ve asked.”

On Friday, the president said that protesters are “expressing their views”:

Trump on protesters: "These are people expressing their views… They seem to be very responsible people to me." pic.twitter.com/s9npfpTg6D

Stelter Warns ‘Don’t Be Fooled By Propagandists’ Over Trump/Iran Coverage, Huckabee Fires Back: “Their ‘News’ Is Delivered From The Bull’s Behind”

Donald Trump On The Southern Border: “This Is Far More Than A Crisis—Our Country Is Being Destroyed!”