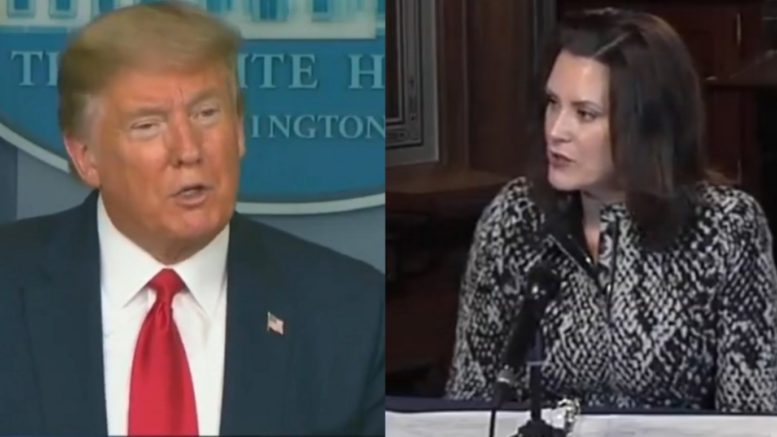 In relation her new order, Gov. Whitmer said on Thursday, “If you’re not buying food or medicine or other essential items, you should not be going to the store.” Videos have since surfaced online showing the so-called “non-essential” sections roped off in stores, including items used for gardening and home-improvement.

President Trump said that he thinks the move by Whitmer is “very extreme,” after a reporter from OAN asked whether he forsees the federal government intervening if other states begin following the Michigan governor’s lead.

“[Governor Whitmer] has banned non-essential goods,” OAN’s Chanel Rion told President Trump. “Many are calling this ‘draconian’, ‘unconstitutional’. As President, do you think thst if other states were to follow her example in the coming weeks, that the federal government should intervene?”

President Trump replied, “Well, I don’t think that’s going to happen. I think it’s very extreme, but she’s doing it and I think it’s going to be over a long way before we have to start thinking about it too much.”

“It is strong. It is a very strong position to take,” he added. “But they’re making a lot of progress in Michigan, so let’s see how it all works.” Video Below

Michiganders have reportedly planned a protest against Governor Whitmer’s new order, which is set to take place this week at the state’s Capitol in Lansing.

Whitmer responded to news of the protest during  Monday’s press conference, where she took a jab at Education Secretary Betsy DeVos, accusing her of backing the group in charge of it.

We leave you with Whitmer’s reaction to the protest:

Michigan Governor Gretchen Whitmer admits people have a right to protest despite the “stay at home” orders. @GovWhitmer pic.twitter.com/Zo4yLX9Bbp

Joy Behar: Gwen Berry Didn’t ‘Hurt Anybody’ When Turning Back To The Flag; Judge Jeanine Levels Her