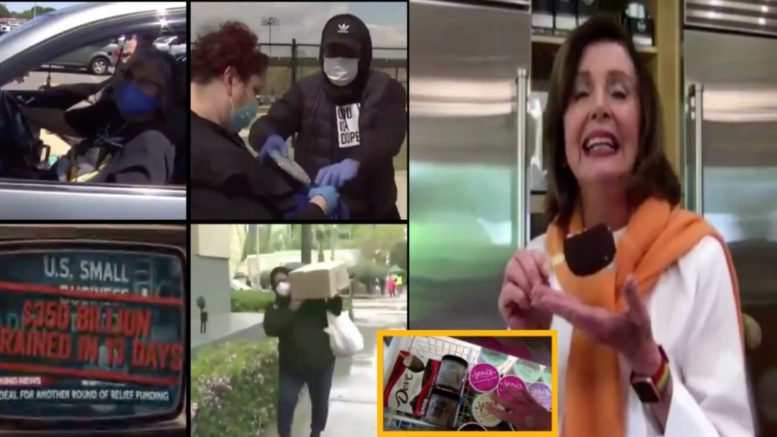 A new video ad released by the Trump 2020 campaign was tweeted by campaign manager Brad Parscale on Monday, amid the coronavirus crisis.

The damning video ad takes aim at House Speaker Nancy Pelosi (D-CA) as the Paycheck Protection Program hit its $350 billion limit last week, and is no longer accepting any more lenders or applications.

The ad begins with a reporter discussing the $350 billion fund to help small businesses, and it goes on to explain that it “will be up to Congress to restock” the Paycheck Protection Program.

Senate Republicans tried to pass a “clean” bill by unanimous consent that would have simply boosted PPP funding by $250 billion. Senate Democrats objected and blocked the bill.

In the next scene of the ad, Speaker Pelosi is heard bragging after she turned down Republicans’ requests to give small businesses more money. “I don’t think so,” she said.

“They objected, and I congratulate the Senate Democrats,” Pelosi had said during an interview with MSNBC’s Chris Hayes last week. Continued Below

The video ad switches scenes and shows Americans out of jobs and walking around with face masks, then Pelosi is seen in her kitchen showing off her chocolate candy.

“Thousands have been forced to wait for hours in food banks all across the country,” a reporter said, showing cars lined up at a food bank in the next scene of the ad.

The ad shifts back to Pelosi showing off $12 pints of Jeni’s ice cream, when she had appeared on “The Late, Late Show With James Corden” last week. “Chocolate, and some other chocolate here. We just got it restocked, the ice cream”, she said. Video Below

“Not everyone has a $24,000.00 fridge stocked fridge”, the ad reads, then shifts to Americans without food in their refrigerators.

“We’re starving,” one lady said in the ad, then it cuts back to Pelosi bragging about her ice cream and laughing. “I like it better than anything else,” she expressed.

“Pelosi snacks on ice cream while Americans lose their paychecks,” the ad then reads, showing another scene of Pelosi who had said, “I don’t know what I would have done if ice cream were not invented. I just wonder.”

Americans are losing their jobs since the virus rocked the economy.

Nancy Pelosi blocks funding for people to keep getting paychecks.