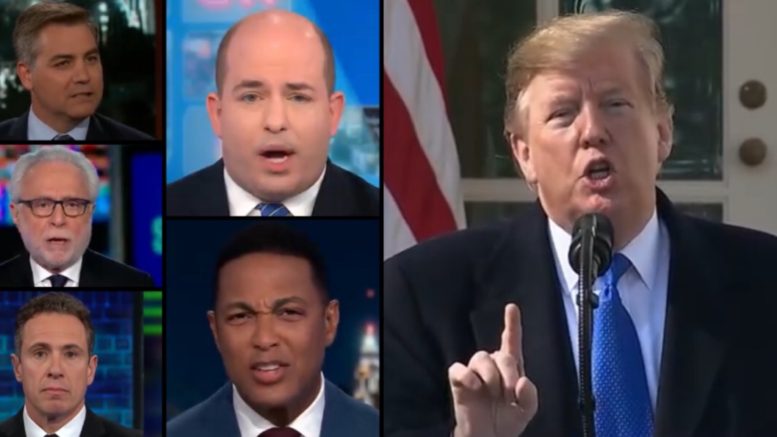 Monday night, CNN’s chief media correspondent, Brian Stelter, reported that the White House is prohibiting CNN from the annual pre-State of the Union lunch with news anchors on Tuesday.

This comes as President Trump is slated to deliver his State of the Union Tuesday evening at 9 p.m. ET.

The dinner is considered off the record, but “it gives the anchors a sense of the president’s state of mind before they anchor” State of the Union coverage, CNN reported.

CNN’s Anderson Cooper and Wolf Blitzer attended last year’s lunch. Blitzer has been attending these lunches longer than almost any other anchor — 20 years in a row, Brian Stelter reported.

Journalists from other networks are still planning on attending, according to sources at those networks. This is the first time in recent memory that a president has singled out one network and opted not to invite any anchors from there, as per CNN.

The president has directed his ire at CNN dozens of times over the past three years. He has declined all of CNN’s requests to sit down with him for an interview and has denigrated both the network as a whole and some of its individual journalists, Stelter reported. (Continued Below)

Last month, CNN’s Don Lemon and his panel targeted the President and his supporters as fly-over state rednecks who can’t read, spell, or understand maps.

Lemon couldn’t stop laughing hysterically after ex-GOP strategist Rick Wilson insinuated President Trump’s administration is “defined by ignorance of the world” and his supporters are “credulous boomer rubes.” (Video Below)

We leave you with a clip of President Trump telling a CNN reporter they are “fake news”:

“Here’s the problem….you are with #CNN …you are fake news!”
– @realDonaldTrump

You go, President Trump – put them in their place!! #BestPresidentEver

Until Zucker is terminated – nobody should take anything they say seriously.

(Related: Rand Paul Blasts CNN When Sparring With Jake Tapper: “You Guys Are Not Being Honest With The Facts”)

Brian Stelter Perplexed Over the Idea of ‘No Rules’ & ‘Total Freedom’ on Twitter: ‘Am I Crazy?’