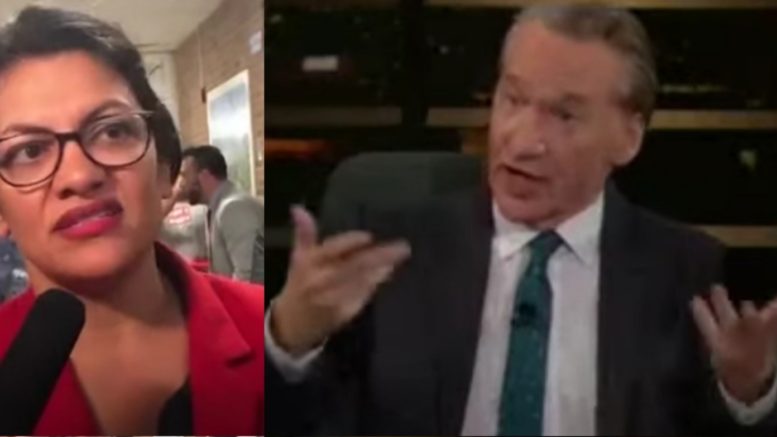 Rashida Tlaib is not happy with anti-trump political commentator and TV host, Bill Maher, after he pushed back against efforts by members of the Democrat party for supporting the BDS movement following Israel’s decision to not allow Reps Tlaib and Omar into their country.

Israel cited both Tlaib and Omar’s open stance against the Jewish state and support for the BDS movement as reason why they weren’t allowed in. However, Israel later allowed entry for Tlaib after pleading to see her grandmother, which she then refused to accept.

According to The Hill, “Maher drew applause in studio on his HBO show after declaring the boycott, divestment and sanctions (BDS) movement supported by some congressional Democrats ‘a bullshit purity test by people who want to appear woke but actually slept through history class.'”

Maher went on to say, “It’s predicated on this notion, I think – it’s very shallow thinking – that the Jews in Israel, mostly white, and the Palestinians are browner, so they must be innocent and correct, and the Jews must be wrong. As if the occupation came right out of the blue, that this completely peaceful people found themselves occupied.”

He then stated that it’s highly likely that Omar didn’t get a “hero’s welcome” due to the fact that she openly spoke out against Israel by saying such things like, “Jews control the world, control the money,” “all about the Benjamins,” “Israel has hypnotized the world” and “May Allah awaken the people and help them see the evil doings of Israel.”

Rashida Tlaib spoke out against Maher, following his remarks and contemplated pushing a boycott of his program. Video Below

Related Article: Mike Huckabee Reacts To Tlaib Rejecting Israel’s Offer To Visit Her Grandmother: ‘It Was Never About Visiting’

“I am tired of folks discrediting a form of speech that is centered on equality and freedom. This is exactly how they tried to discredit & stop the boycott to stand up against the apartheid in S. Africa. It didn’t work then and it won’t now,” she concluded. Video Below

Maybe folks should boycott his show.

I am tired of folks discrediting a form of speech that is centered on equality and freedom. This is exactly how they tried to discredit & stop the boycott to stand up against the apartheid in S. Africa. It didn't work then and it won't now. https://t.co/Oa49ZVfrVN

In ending, here is the full segment of Bill Maher where he railed against Democrats’ anti-Israel efforts: