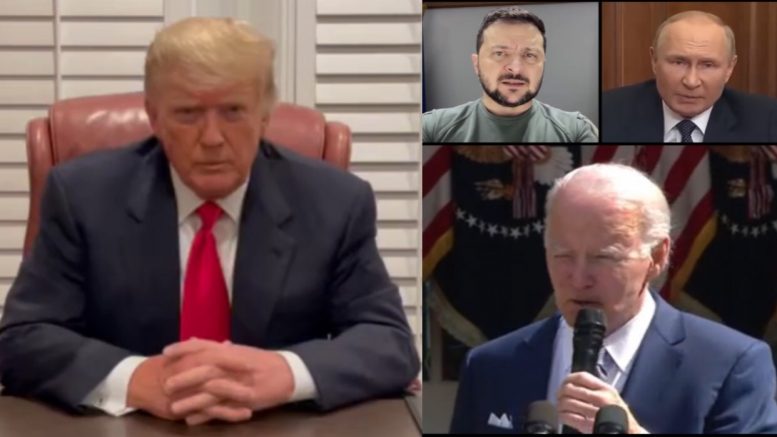 45th President Donald J. Trump is offering to “head up a group” to “get a negotiated deal done NOW”, and for American leaders to remain “cool, calm, and dry”.

Trump offered to help broker a deal between the United States, Russia, and Ukraine to end the war, following reports Tuesday that the Nord Stream pipelines traveling across the Baltic Sea were leaking, with European officials pointing to “sabotage” as the likely reason.

“Everyone is talking about the big hurricane barreling into Florida, as they should be, but perhaps a far more important event in the longer term was the announcement that the Nord Stream I & II Pipelines out of Russia (which I brought to the World’s attention as President when I explained how crippling reliance on it could be for Germany and other parts of Europe,” Trump wrote on Truth Social Wednesday.

“Everybody laughed at the time, but they are not laughing anymore!) has been SABOTAGED. This could lead to major escalation, or War!” he said, reminding everyone when he spoke at the United Nations General Assembly.

“U.S. ‘Leadership’ should remain ‘cool, calm, and dry’ on the SABOTAGE of the Nord Stream Pipelines. This is a big event that should not entail a big solution, at least not yet,” the former commander in chief explained.

“The Russia/Ukraine catastrophe should NEVER have happened, and would definitely not have happened if I were President,” he wrote.

“Do not make matters worse with the pipeline blowup. Be strategic, be smart (brilliant!), get a negotiated deal done NOW. Both sides need and want it. The entire World is at stake. I will head up group???” the 45th President offered.

Since these leaks were reported, leaders in European countries have suggested that the leaks were not accidental, but rather likely a result of “sabotage.”

Are you still laughing, Germany?

We tried to warn you. #NordStream2 pic.twitter.com/kawsJZ2nMk

Trump also shared a video on Truth Social of Joe Biden threatening to stop Russia’s Nord Stream 2 gas pipeline in February, and the 45th President suggested that ‘World War III’ could be near.

The same video was also shared by the Russian government on Wednesday while suggesting Biden was behind the explosions that led to the Baltic Sea leaks, Daily Mail noted.

Related: Trump on the Ukraine Situation: ‘[Putin] Would Have Never Done During the Trump Administration What he is Doing now, no Way!’