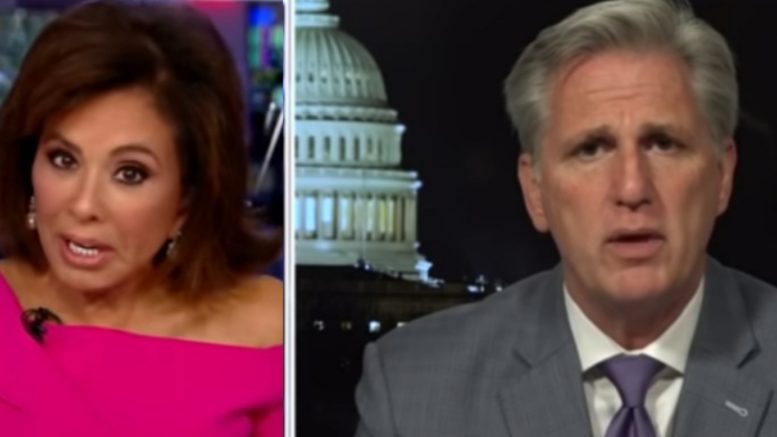 While appearing on Saturday’s airing of Justice With Judge Jeanine, House Minority Leader Kevin McCarthy exposed several implications of “China’s communist cover-up” of their negligence resulting in the COVID-19 pandemic.

Judge Jeanine began the discussion by emphasizing China’s lack of transparency throughout the global spreading of the coronavirus, which is believed to have originated in their country.

When getting a turn to weigh in, Rep. McCarthy declared, “This is China’s communist cover-up cause if you watch, the doctor who gave the warning, you can not find him.”

He cited a study done by the University of South Hampton and suggested, “Had China been honest with the world, 95% fewer people would have been sick. That means it would have been controlled and contained inside China if they would have just allowed when President Trump requested our scientists, our researchers, our doctors — we would have contained that there.”

McCarthy then questioned why China decided to re-open up their wet markets, which is where the coronavirus is thought to have originated.

“Have enough people died for them to understand?” he questioned. “Has there been enough financial destruction — not just in China and America, but around the world every single day — and they continue to deny it? Their own numbers are a lie.” Video Below

McCarthy went on to point out another study thst suggests there have been an estimated 43,000 unreported coronavirus deaths in Wuhan, China, where the virus most likely originated.

“They estimate 43,000 people in China died there (in Wuhan). We will not know because they killed doctors, they don’t give the real reporting, and because of their coverup we are having [more than] a million people have this virus and the thousands of people who have died,” Rep. McCarthy said. Video Below