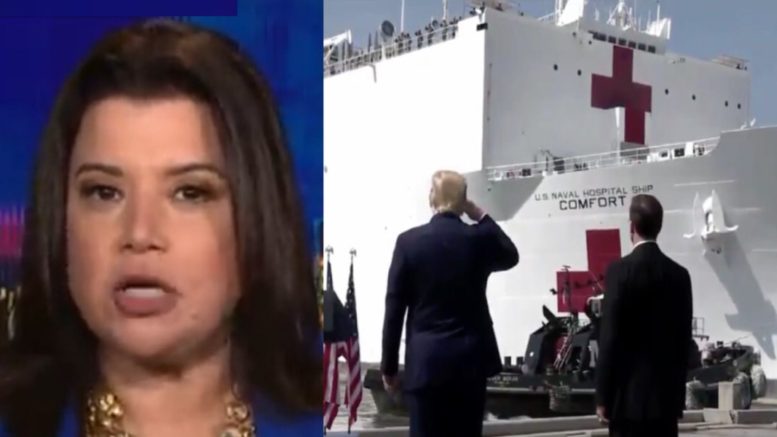 Ana Navarro-Cárdenas, a political commentator for various news outlets, including CNN, CNN en Español, ABC News, Telemundo, and ABC’s “The View”, wonders “who are these 51% of Americans who approve” of President Trump’s handling of the coronavirus outbreak.

Navarro tweeted an article Friday from ABC News, which revealed that 51% of Americans approve of the president’s handling of the coronavirus outbreak; 45% disapprove.

According to ABC News, President Donald Trump’s overall job approval rating advanced to his best on record in ABC/Post polls, 48%, even as 58% say he acted too slowly in the early days of the outbreak. This is the first time since he took office that Trump’s approval rating has exceeded disapproval of his work, 46% (though the difference isn’t statistically significant).

Ana Navarro took to Twitter venting her frustration on Friday, asking: “Who are these 51% of Americans who approve of the way this lying, narcissistic, science-denying, petty, partisan, infantile, intellectual wasteland, lame excuse for a President with the vocabulary of a 4 year-old (apologies to 4 year-olds), is mishandling this crisis? Really.” (Continued Below)

Who are these 51% of Americans who approve of the way this lying, narcissistic, science-denying, petty, partisan, infantile, intellectual wasteland, lame excuse for a President with the vocabulary of a 4 year-old (apologies to 4 year-olds), is mishandling this crisis? Really. https://t.co/pOM3zZCo0h

Upon asking “who are these 51% of Americans who approve”, Twitterverse responded to Navarro. We leave you with a few of those highly engaged responses.

I’m one of them. https://t.co/CfvHbyllWH

I’m one of the 51% & I’m voting for President Trump #NoMatterWhat.

P.S. Didn’t you vote for Gillum?

Translation. How could it be? We lied, cheated and stole for three years and the American voters still do not believe our BS.

The 51% is made up of people who disagree with you and think you’re dumb.

The 51% who aren’t on China’s payroll. #PutTheDumplingDown

And just think other polls have him at over 60%.

We’ve seen the truth about the media for a long time, now. The media lies, leaves off information to create a ugly narrative about President Trump and other situations. Those days are coming to an end soon. #TheStormIsHere

That’s a hell of a spin cycle you just put us on…..sad you don’t know the difference between a coordinated attack by an enemy and a virus. You and Navarro are two good examples of why he’s polling so well.

Lol the polls saying HilLIARry was going to win by a landslide even on Election Day in 2016, you mean those polls! Hilarious! 😂😂

Yesterday, half the country never actually watched Trump’s press conferences or read his tweets. They just believed #fakenews narrative. Today, everyone listens. They are learning first hand what an excellent President they have.

People like me. People who serve their country & communities. The first responders, nurses & truck drivers. The blue collar workers literally keeping this country running. We the people are “those people”. Go seek help with your TDS #fakenews Ana.

The question is: what in Hell is wrong with 45% of Americans who believe the lying media and Hollywood know it alls?

The same 51% that are going to re-elect him. Will give all of us immense pleasure to see you meltdown every day for another four years. #KAG2020LandslideVictory

Count me as one of the 51% who aren’t bowing down to the scare tactics of the MSM and who continue to test negative for TDS pic.twitter.com/bTf9TYIUgQ

We leave you with Navarro comparing convicted felon Michael Avenatti to the Holy Spirit:

“You're like the Holy Spirit. You are all places at all times”pic.twitter.com/FwUPhl0jqo