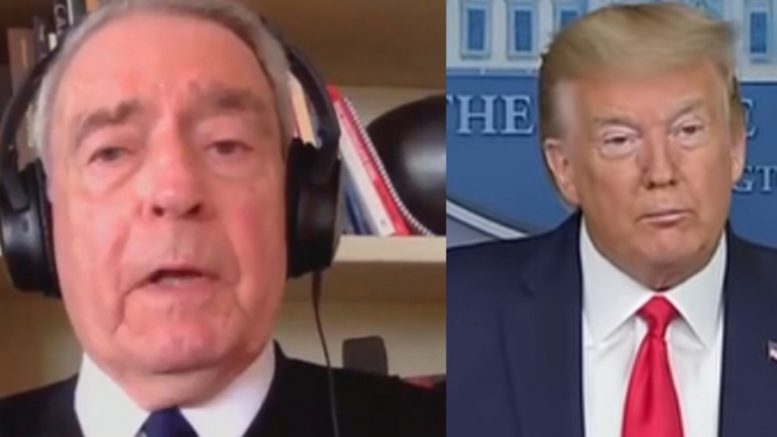 Dan Rather, who was fired from CBS News for peddling disinformation during the 2004 U.S. presidential election, called on the media to do their jobs by paying “far less attention to President Trump” amid the coronavirus pandemic.

Rather made the suggestion on CNN’s “Reliable Sources” Sunday, when he was asked how “television anchors and other media leaders should be handling this moment”.

“Well, first of all, to do our job, which is to get the facts, report as many of the facts as possible, connect the facts,” Dan Rather told Brian Stelter.

“And I would say, until and unless he proves differently, to pay far less attention to President Trump,” Rather suggested.

“I really regret having to say that. But he’s not going to come to anybody’s rescue and the faster we realize that, the better off we’ll be,” Rather claimed.

MSNBC’s Rachel Maddow suggested on Friday that President Trump should be taken off the air during the coronavirus pandemic, saying that the president’s “misinformation” surrounding the outbreak could “cost lives.”

“I know we ought to be getting used to this kind of thing by now, but I’m not. President Trump today, again, just flat-out wrong in public about this malaria drug that has gotten stuck in his mind, quite some distance from the facts,” Maddow said.

“If the president does end up saying anything true, you can run it as tape but if he keeps lying like this every day on stuff this important, all of us should stop broadcasting it. Honestly, it’s gonna cost lives,” she added. (Video Below)

On Thursday during a White House Task Force briefing, the Commander-in-Chief announced the FDA approval of Hydroxychloroquine for treatment of the coronavirus after a new study revealed that hydroxychloroquine, a drug that was developed over half a century ago to treat malaria, is showing signs that it may help treat COVID-19 when combined with an antibiotic.

“We’re also implementing the trial drug. We have secured 70,000 Hydroxychloroquine, 10,000 Zithromax, [and 750,000 Chloroquine] from the federal government,” Governor Cuomo said. (Video Below)

“I want to thank the FDA for moving very expeditiously to get us this supply. The president ordered the FDA to move and the FDA moved. We’re going to get this supply and the trial will start this Tuesday,” he continued.

“The president is optimistic about these drugs and we are all optimistic that it could work. I’ve spoken to a number of health officials and there is a good basis to believe that they could work,” Governor Cuomo added.

Trump Announces the Passing of his First Wife Ivana: ‘She was a Wonderful, Beautiful & Amazing Woman, who led a Great & Inspirational Life’