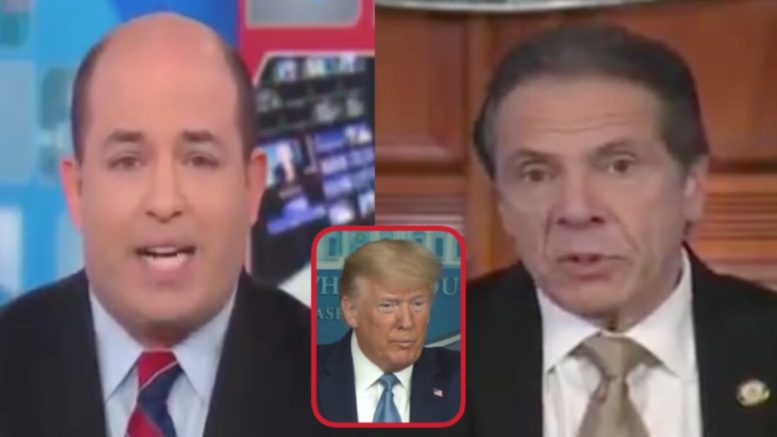 On Thursday during a White House Task Force briefing, the Commander in Chief announced the FDA approval of Hydroxychloroquine for treatment of the coronavirus after a new study revealed that hydroxychloroquine, a drug that was developed over half a century ago to treat malaria, is showing signs that it may help treat COVID-19 when combined with an antibiotic.

“The president is optimistic about these drugs and we are all optimistic that it could work. I’ve spoken to a number of health officials and there is a good basis to believe that they could work,” Governor Cuomo added.

After Andrew Cuomo’s news conference on Sunday, Brian Stelter praised the New York Governor saying, “This has been a remarkable show of leadership by Governor Cuomo in recent days. He’s providing hope, but not false hope”. He did not praise the President though.

“The American people are looking for answers and they’re looking for hope,” the Commander in Chief said Friday during a Coronavirus Task Force briefing. (Continued Below)

NBC’s White House correspondent Peter Alexander, on Friday, had challenged the president’s statement that he was hopeful about the efficacy of a Hydroxychloroquine and Zithromax that may help with the coronavirus.

“Is your impulse to put a positive spin on things maybe a false sense of hope on the nonapproved drug?” Alexander asked the president.

“Such a lovely question,” the president sarcastically responded. “It may work and it may not work. I feel good about it. …The FDA is working very hard to get it out. I’m not being overly optimistic or pessimistic. I sure as hell think we ought to give it a try. … Let’s see what happens,” the president said. (Video Below)

He quoted from the article: “To fight the coronavirus, President Donald Trump is adopting the audacity of false hope”.