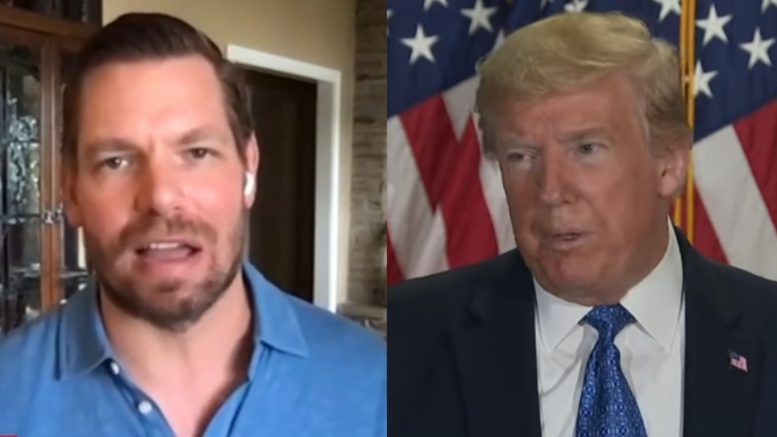 Democrat Congressman Eric Swalwell claimed President Trump is a “serial offender” on Wednesday and implied that oversight hearings are a great way of keeping a proverbial “ankle monitor” on his actions running up to the 2020 election.

Swalwell made the remarks while interviewing with MSNBC’s Nicole Wallace.

“We have to have an ankle monitor on this President,” Swalwell said. “This is the worst possible time for a serial offender like him to be running around unsupervised.”

The congressman went on to mention the Democrat-backed rule change that went into effect last week permitting Congress to operate remotely, and will allow virtual oversight hearings over the Trump administration to go on as planned.

“So we will start holding hearings. We expect that any invitation or subpoena to any in-person congressional hearing will also be honored for virtual hearings,” Swalwell said

Swalwell made his assessment on the same day that the Supreme Court temporarily denied a motion from House Democrats to obtain grand jury testimony from former Special Counsel Robert Mueller’s Russia investigation. Continued Below

The motion that was rejected by the high court on Wednesday was part of an apparent effort by Democrats to initiate a second impeachment investigation against President Trump, Fox News reported.

The court’s order kept undisclosed details from the probe into Russian interference in the 2016 presidential election out of the Democrats’ hands until at least early summer. Democrats have until June 1 to brief the court about whether the full case should be heard, per Fox News.

You can read more on this by CLICKING HERE.

…The order gives the parties until June 1st to file. If the Court were to take the case, the material likely to remain enjoined until after the election. The House may have undermined its case with a type of perpetual impeachment claim in its briefing. https://t.co/qi7UwUBDmr

AZ Sen. Wendy Rogers Ensures ‘The Audit Is Coming’, Signals ‘Other Information Is Coming Out’