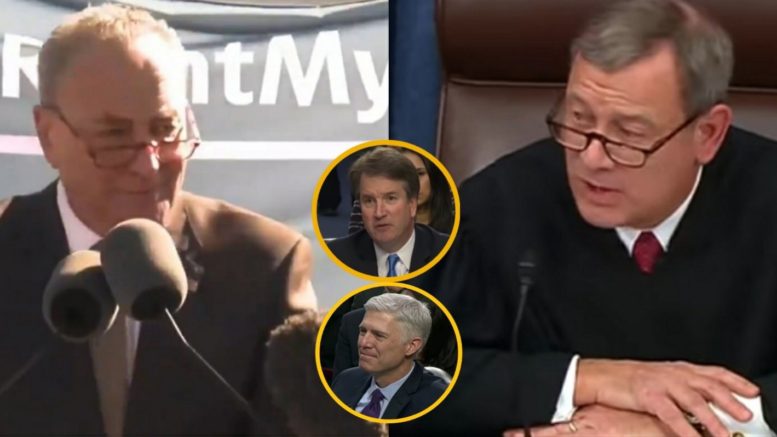 During a rally on Wednesday outside the U.S. Supreme Court, Senate minority leader Chuck Schumer (D-NY) warned Supreme Court Justices Neil Gorsuch and Brett Kavanaugh that they “will pay the price”, while he spoke to activists and rallygoers.

At the rally hosted by the Center for Reproductive Rights, Schumer noted that the case, June Medical Services LLC v. Russo, is the first “major” abortion case since President Trump’s court picks have been on the bench. The dispute, dealing with restrictions over who can perform abortions, involves a Louisiana law similar to one in Texas that the court ruled unconstitutional in 2016, before either Trump justice was on the Supreme Court and before conservatives held a 5-4 majority, as reported by Fox News.

“I want to tell you, Gorsuch. I want to tell you, Kavanaugh. You have released the whirlwind and you will pay the price!” Senator Schumer warned. “You won’t know what hit you if you go forward with these awful decisions.” The New York Democrat also said the pair “won’t know what hit you” if they side in a way that hurts abortion access in a case before the court Wednesday. [Emphasis added].

Schumer did not explain what “price” this would be as far as the justices are concerned. But reached for comment, his office said in a statement to Fox News: “It’s a reference to the political price [Republicans] will pay for putting them on the court and a warning that the justices will unleash a major grassroots movement on the issue of reproductive rights against the decision.”

“This morning Senator Schumer spoke at a rally in front of the Supreme Court while a case was being argued inside. Senator Schumer referred to two Members of Court by name and said that he wanted to tell them that “You have released the whirlwind, and you will pay the price. You will not know what hit you if you go forward with these awful decisions,” Supreme Court Chief Justice Roberts said. (Continued Below)

“Justices know that criticism comes with the territory, but threatening statements of this sort from the highest levels of government are not only inappropriate, they are dangerous,” Chief Justice Roberts expressed, slamming Schumer.

“All members of the Court will continue to do their job, without fear or favor, from whatever quarter,” he added.

Following Roberts’s response, Schumer spokesman Justin Goodman released a statement: “Women’s health care rights are at stake and Americans from every corner of the country are in anguish about what the court might do to them. For Justice Roberts to follow the right wing’s deliberate misinterpretation of what Sen. Schumer said, while remaining silent when President Trump attacked Justices Sotomayor and Ginsberg last week, shows Justice Roberts does not just call balls and strikes.” (Video Below)

President Trump called for Justices Sonia Sotomayor and Ruth Bader Ginsburg to recuse themselves on cases involving his administration in February. 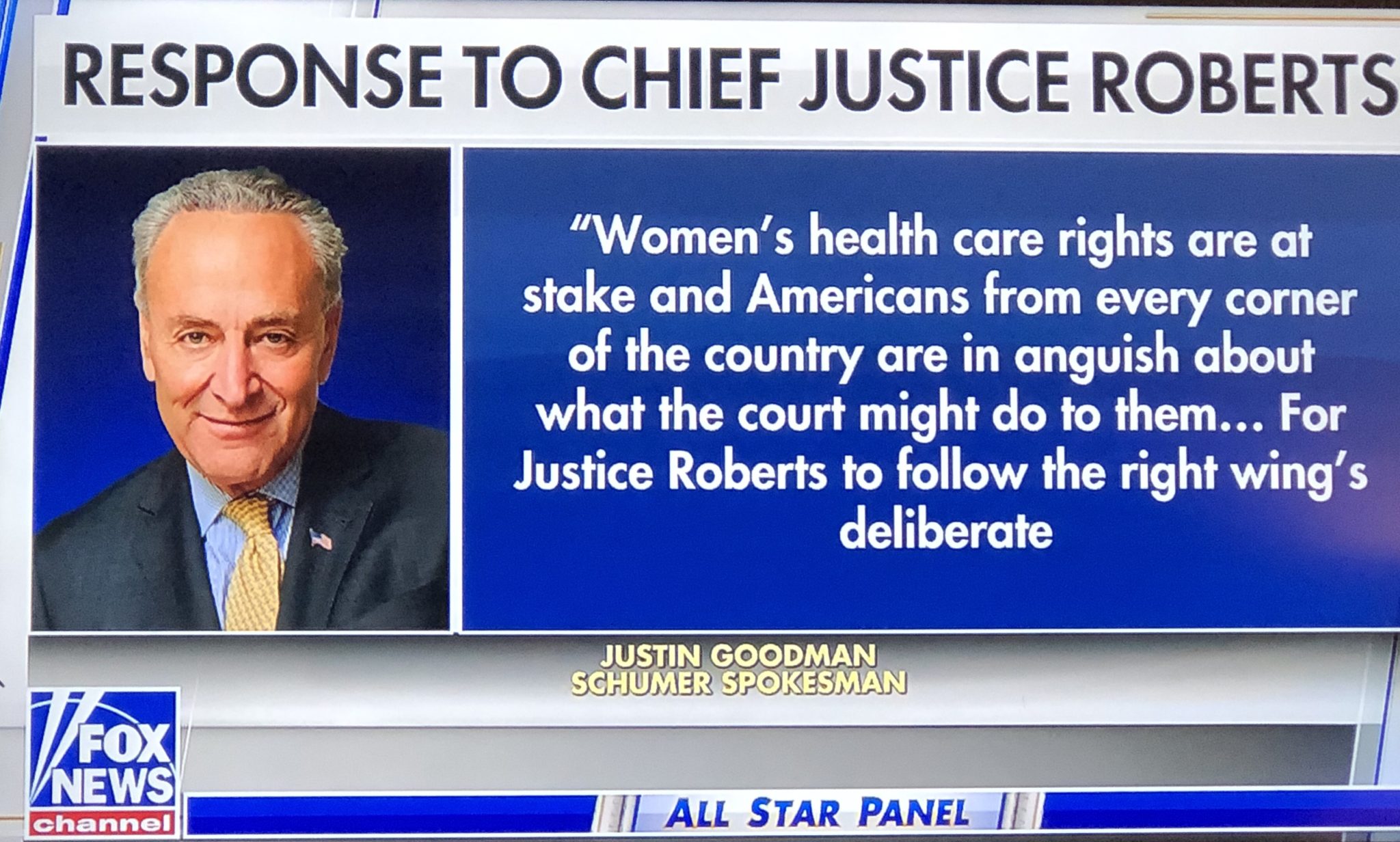 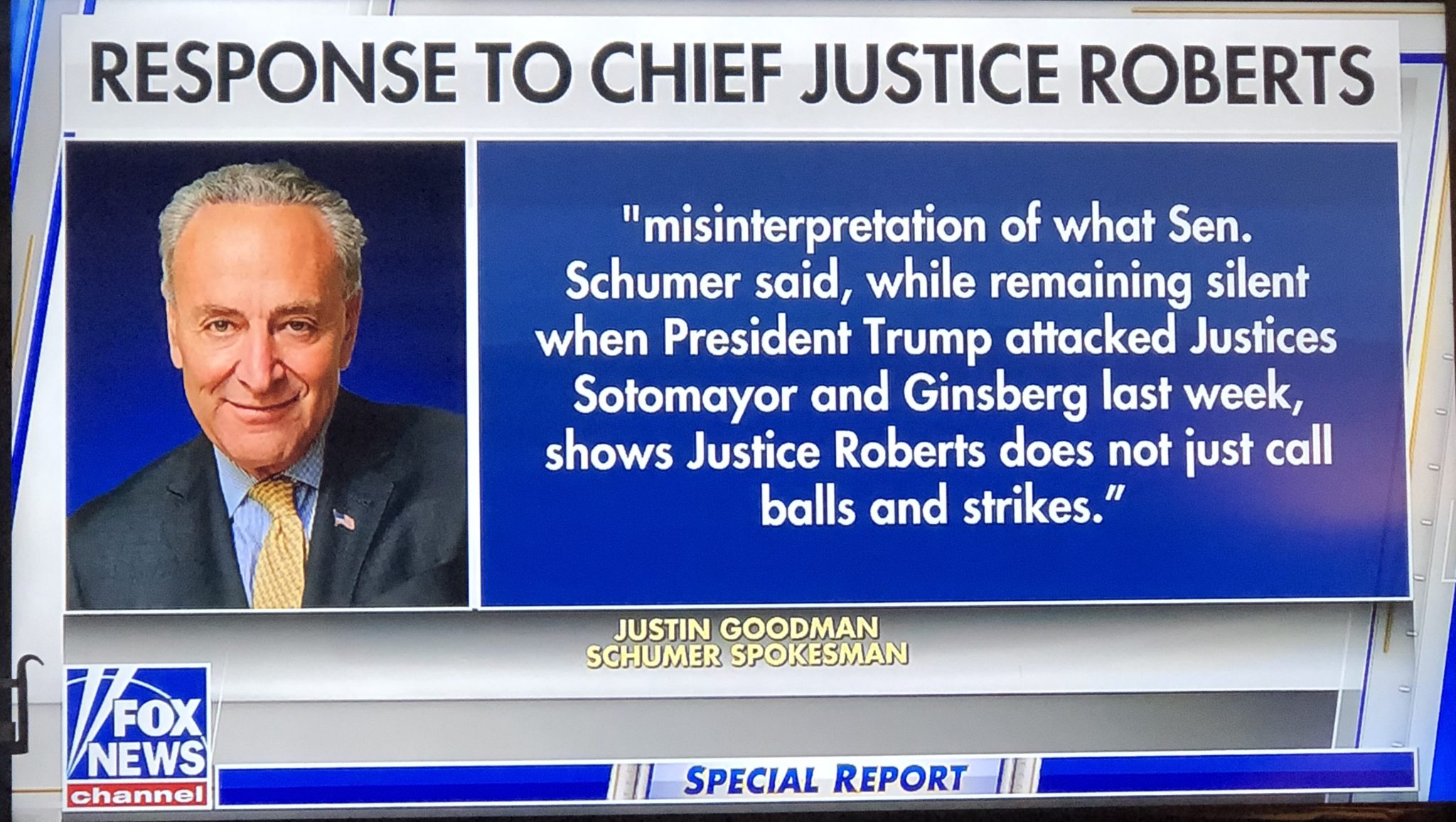