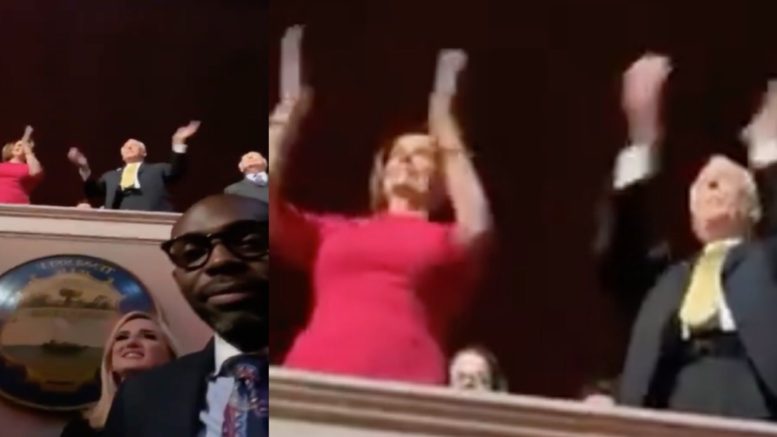 On Wednesday in Washington, Garth Brooks accepted the Library of Congress’s Gershwin Prize for Popular Song at a tribute concert.

The award is the Library of Congress’s most prestigious honor, given to artists who promote the “genre of song as a vehicle of cultural understanding, entertaining and informing audiences, and inspiring new generations of musicians.”

“I hope this doesn’t offend you,” Brooks quipped to the audience from the stage at DAR Constitution Hall, “but boy, I never thought I’d see unity like this in this crowd!” as per The Hill.

The Hill also noted, among the members of Congress spotted at the event: McCarthy and Sen. Pat Roberts (R-Kan.) chatting with Skaggs; Rep. Jim Jordan (R-Ohio) joining in a standing ovation after Brooks and Urban opened the concert with a spirited duet of “Ain’t Goin’ Down (‘Til the Sun Comes Up)” and Rep. Will Hurd (R-Texas) tapping his hand and head along to the beat as Chris Stapleton belted out “Rodeo.”

GOP commentator and strategist, Paris Dennard, attended the concert and spotted Speaker Nancy Pelosi and House majority leader Steny Hoyer clapping along to Garth Brooks’ famous song “Friends in Low Places”, and said, “The rhythm never got them”. (Continued Below)

Paris Dennard posted a video on Twitter of Speaker Pelosi and Steny Hoyer in a balcony above him, clapping along to the music. However, the Democratic lawmakers appeared to be clapping offbeat to the music. Dennard shook his head while laughing.

Dennard tweeted with the video: “#aboutlastnight at the Gershwin Prize concert honoring Garth Brooks. In the words of a former Gershwin Prize honoree, Gloria Estefan ‘The rhythm is gonna get you…’ well all I can say is last night…for Speaker Pelosi and Rep. Hoyer…the rhythm NEVER got them. At all. 👏🏾 🤦🏾‍♂️”.

The Gershwin Prize concert will air as a TV special on PBS stations on March 29. (Video Below)

In the words of a former Gershwin Prize honoree Gloria Estefan “The rhythm is gonna get you…” well all I can say is last night…for Speaker Pelosi and Rep. Hoyer…the rhythm NEVER got them. At all. 👏🏾 🤦🏾‍♂️ pic.twitter.com/hnmpBCrqrl

I accept this #GershwinPrize in honor of the spirit of Nashville. As one in community and music. love, g pic.twitter.com/OFbSP6xiLu