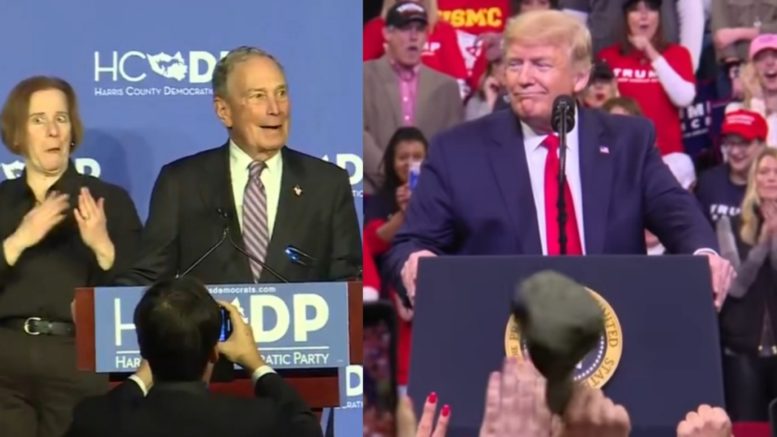 On Thursday evening, Presidential candidate Michael Bloomberg claimed his campaign is “scaring the living hell” out of President Trump with less than 9 months to go until the general election.

The former New York mayor made the suggestion while speaking at the Harris County Democratic Party’s annual Johnson, Rayburn, Richards Dinner in Texas after getting endorsed by Houston’s mayor Sylvester Turner.

Related Article: Bloomberg Floats Raising Taxes On The Poor So They Can ‘Live Longer’, Huckabee Responds: “Stunning That He Unflinchingly Said It Publicly”

“Now if I were from Texas, I might say Donald Trump is scared as a cat at the dog pound,” Bloomberg said. “But since I’m from New York, I put it this way. We’re scaring the living hell out of him, and we’re just starting right now.”

In another part of his of his speech, Bloomberg claimed, “President Trump only knows how to divide and destroy and he has no idea how to create and unify.”

He continued, “And it reminds me of Sam Rayburn’s saying, as you may know, ‘Any jackass can kick down a barn but it takes a good carpenter to build one.'” Video Below

Mike Bloomberg: "Now if I were from Texas, I might say Donald Trump is scared as a cat at the dog pound. But since I'm from New York, I put it this way. We're scaring the living hell out of him, and we're just starting right now." pic.twitter.com/HmNwKuTPZL

Former Presidential candidate Julián Castro, who also spoke at the Houston event, slammed Bloomberg for the “stop & frisk” program that he stood behind while serving as New York’s mayor.

“Under Mayor Bloomberg, so many men of color were subjected to the humiliation of stop and frisk,” Castro said. “Over and over and over again, young men of color were harassed at the urging of Mayor Bloomberg and he took that program — he inherited it, he expanded it, he beat his chest about it proudly for so many years, and then seven days before he announced he’s running for President, he apologized.”

In ending, here are reactions from James Woods and Ted Cruz in regards to Bloomberg saying he’s “scaring the hell” out of President Trump:

He might be more scared if you’d get up on your box maybe… https://t.co/JX03WZpQmD

Um, nobody in Texas says that. Ever. Translation: “somebody told me that lots of people in ‘fly-over country’ have animals. Let me try to say something folksy about animals so the yokels will think I can relate….” https://t.co/ClO0KrxrJo