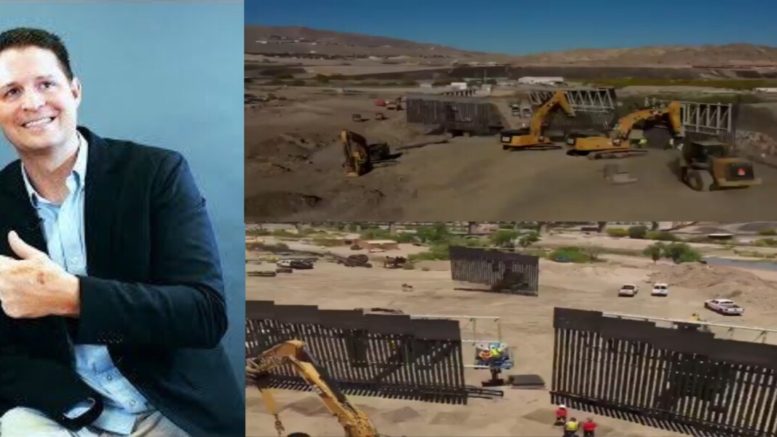 Remember when there was a Go Fund Me account circulating around social media to donate to build the wall, started by Brian Kolfage, a Purple Heart recipient triple amputee veteran, who the left-wing media tried to smear and claim that he was a con-artist?

Turns out, he is in fact, not a con-artist, and the media lied and tried to smear him.

A privately funded organization called “We Build the Wall” began work this weekend on a project to build a section of border wall near El Paso, Texas after America pitched in and donated. The Wall will be built on private land.

Monday on “Fox & Friends”, former Kansas Secretary of State, Kris Kobach said that the project was undertaken because there is a “ridiculously large gap” near Mount Cristo Rey that drug and human smugglers are taking advantage of.

“This is the first time any private organization has built a border wall on private land,” Kobach said. “We’ll keep on building as long as people keep chipping in. The average contribution has been only $67 but so many people have chipped in.”

This is a huge surprise for the President and America, and the announcement comes just days after U.S. District Judge Haywood Gilliam Jr.’s order issued on Friday blocked the President from beginning on two of the highest-priority, Pentagon-funded wall projects. On Saturday, Trump pledged to file an expedited appeal of the ruling. (Continued Below)

At the website, We Build The Wall, Kolfage says, “Like a majority of those American citizens who voted to elect President Donald J Trump, we voted for him to Make America Great Again. President Trump’s main campaign promise was to BUILD THE WALL. And as he’s followed through on just about every promise so far, this wall project needs to be completed still.”

“As a veteran who has given so much, 3 limbs, I feel deeply invested to this nation to ensure future generations have everything we have today. Too many Americans have been murdered by illegal aliens and too many illegals are taking advantage of the United States taxpayers with no means of ever contributing to our society,” Kolfage said.

He continued, “It’s up to Americans to help out and pitch in to get this project rolling. If the 63 million people who voted for Trump each pledge $80, we can build the wall. That equates to roughly 5Billion Dollars, even if we get half, that’s half the wall. We can do this. Democrats are going to stall this project by every means possible and play political games to ensure President Trump doesn’t get his victory. They’d rather see President Trump fail than see America succeed. However, if we can fund a large portion of this wall, it will jumpstart things and will be less money Trump has to secure from our politicians.” (Continued Below)

Check out some of the recent updates from Brian Kolfage:

Remember when this was going around? It was fake news all along!