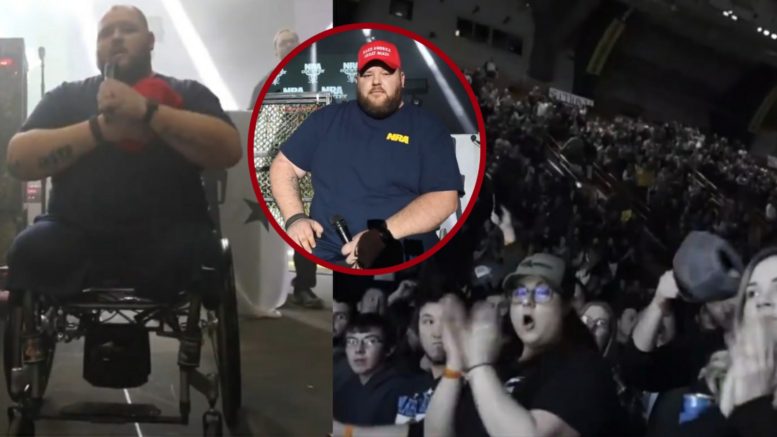 A concert crowd erupted in USA chants on Saturday after Army Sgt. Dennis Leonard, who lost his legs while fighting in Iraq, got done reciting the Pledge of Allegiance and put on his MAGA hat.

The high-energy moment took place during the NRA Country Concert at the Great American Outdoor Show in Harrisburg, PA.

Related Article: SAS Crowd Erupts In “USA!” Chants After Benny Johnson Asks Siri: Who Is President Of The US?

As he was being introduced to the crowd, the announcer quoted Sgt. Leonard, who said, “You have the right to not stand for the National Anthem or recite the Pledge of Allegiance only because of the price that many have paid.”

Sgt. Leonard then came forward in his wheel chair, took off his red “Make America Great Again” hat and recited the Pledge of Allegiance as the stage lights beamed over him.

After he finished and put his MAGA hat back on his head, Leonard was met with an enormous cheer and “USA!” chants. Video Below

Dolly Parton Issues A Statement On The Death Of Charlie Daniels: “Charlie Went Straight To Heaven”