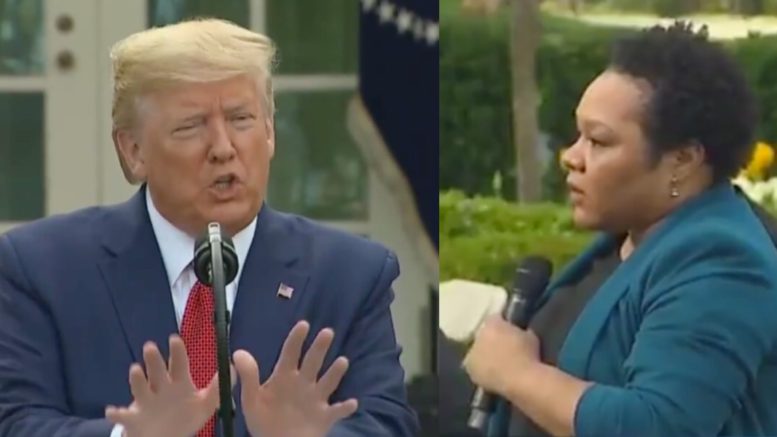 “You said repeatedly that you said some of the equipment that governors are requesting they don’t actually need, and you said New York might need– might not need 30k… you said it on Sean Hannity’s Fox News…”, Alcindor began to say.

“Why don’t you people act, why don’t you act in a little more positive [way]? It’s always trying to ‘getcha’. ‘Getcha-getcha’. And you know what? That’s why nobody trusts the media anymore. … That’s why you use to work for the Times and now you work for somebody else. Look, lemme tell you something: be nice. Don’t be threatening, be nice,” the president urged.

Yamiche Alcindor then asked President Trump, “My question is how is that gonna impact how you fill these orders for ventilators or for masks? It’s not going to impact you at all?”

“There’s some tremendous numbers of ventilators. We’re doing a great job on it. Mike Pence, our vice president who’s headed up the Task Force, which has been incredible the job they’ve done– we have everybody in the White House working on it. We have– everybody in the country is working on this in one way or another. The fact is, we’ve done a great job of delivering,” the president explained.

“I’m just saying this: if they’re holding– let me give you one example. We sente thousands of generators to New York. They were put into a warehouse, a New York warehouse that happened to be located in, interestingly, Edison, New Jersey. They were given to New York and we then went to other places, also giving thousands of ventilators,” he continued. Continued Below

(Related: Don Jr. Turns The Tables On Pelosi After She Questions Trump’s Response To COVID-19: “Don’t Try To Rewrite History”)

Yamiche asked the president another question over “mental health” and “suicide” related to COVID-19:

Meanwhile on Twitter, “You People” started trending after the President’s exchange with Yamiche. It appears to be liberals upset who are claiming the president said “You people” because of her race.