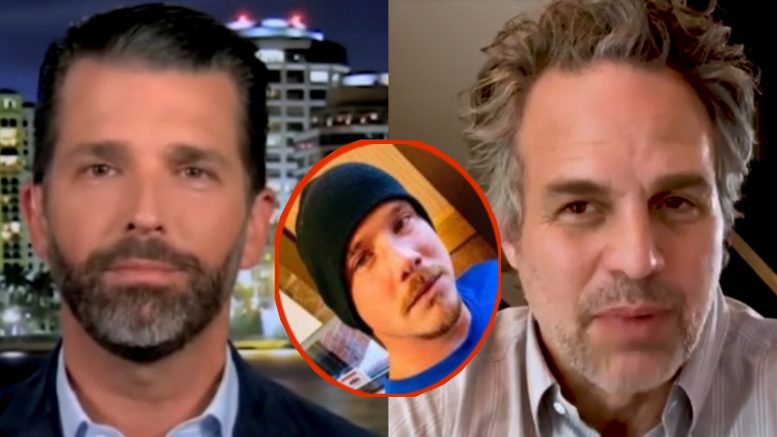 Donald Trump Jr. unleashed a Twitter storm over the weekend after Hollywood actors publicly mourned the loss of Joseph Rosenbaum and Anthony Huber who were shot and killed by Kyle Rittenhouse when a conflict involving the trio unfolded during the Kenosha, WI riots.

Rittenhouse maintained that he acted in self defense, and on Friday he was found not guilty of all charges against him, including intentional homicide, setting off a whirlwind of negative reactions from forces of the Left.

We come together to mourn the lives lost to the same racist system that devalues Black lives and devalued the lives of Anthony and JoJo. #ReimagineKenosha

After all we have seen and heard about these weapons of war, these killing machines, there is no doubt that people who faced this young man were more afraid of him than he was of them. He was the one with a weapon of war, loaded and ready to be used on people.

Justice weeps bitterly today. We are coming together to heal the scars left by the wounds of this grief. We will care for each other and remember why we continue to march.

We come together to mourn the lives lost to the same racist system that devalues Black lives and devalued the lives of Anthony and JoJo. #ReimagineKenosha

Another Hollywood actor, Pedro Pascal, tweeted a picture of both Rosenbaum and Huber with the caption, “Joseph Rosenbaum, 36, and Anthony Huber, 27, murdered August 25th, 2020. Rest In Peace.”

Related Article: Tucker: “Joseph Rosenbaum Died As He Had Lived, Trying to Touch an Unwilling Minor”

“Records reveal Joseph Rosenbaum, who was shot in the head and killed by Kyle Rittenhouse in Kenosha… molested five boys,” according to the Kenosha Reporter.

Trump Jr. referred to the above facts as he unloaded on Ruffalo, Pascal, other Hollywood elites and Democrats over their strong support for a purported convicted child rapist.

Here is a collection of his responses:

This is the left. Using cutesy nicknames for multiple-time convicted child molesters.

“JoJo“ is a POS pedophile who sexually assaulted five young boys between the ages of 9 and 11 & somehow got out of jail, but he’s a really good dude who’s just misunderstood. Fuck these people. https://t.co/fnZShJcN81

I’m old enough to remember when Democrats wouldn’t go all in to defend a N-Word screaming 5 time child rapist pedophile… but apparently this is the new Democrat Party.

Just kidding, you don’t have to wonder, you know exactly why! https://t.co/msnXZjpEgM

I can assure you the world is a better place without him, and only a sociopath would mourn his loss in another attempted assault on a child. Yet here we are

Grant Stinchfield To Donald Trump Jr.: “Any Chance You Run For Office Soon?”

Don Jr. Defends Chelsea Clinton After Students Blame Her For NZ Attacks: ‘Chelsea Should Be Praised For Speaking Up’