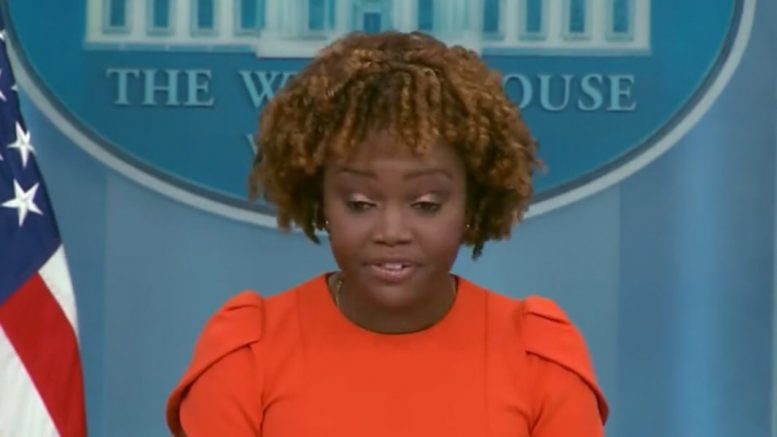 White House press secretary Karine Jean-Pierre on Monday alleged that “MAGA Republicans” are a “threat to the rule of law”, “attack our democracy”, and have taken “away our rights”.

Jean Pierre was asked about upcoming remarks 79-year-old Joe Biden is going to make on Tuesday over his “safer America” plan, claiming that Biden will tell listeners that “the answer is not to defund the police, it’s to fund the police”.

The White House press secretary told reporters that Joe Biden will call for more police officers to strengthen public safety, adding that after the American Rescue Plan was signed into law, “we sent $350 billion to local government to keep cops on the beat.”

“And in contrast, every Republican in Congress voted against the funding for law enforcement. And Trump, Donald Trump also cut $450 billion from his budget for state and local law enforcement,” she asserted, without explaining the underlining reasons why.

“The president is going to talk about how he brought the Democrats and Republicans together earlier this month to pass the most significant safety law in 30 years. He’ll talk about how we’ve built that momentum and how we must act to ban assault weapons,” Jean-Pierre said.

“You know, the president has been really clear how congressional Republicans — that extreme MAGA agenda that you heard him talk about last week — is a threat to the rule of law. He will say that ‘You can’t propose the funding FBI or defund the mob that stormed the Capitol and attacked and assaulted the police officers on January 6th and be pro-police,'” she said.

Karine Jean-Pierre says Biden has been "really clear" that the "extreme MAGA-agenda" is "a threat to the rule of law." pic.twitter.com/QjUiUXl297

When answering a different question over recent remarks made by Senator Lindsey Graham, the press secretary also claimed “MAGA Republicans attack our democracy”, “take away our rights”, and “make threats of violence”.

Related: Sidney Powell: “I Would Love to See the Paper Trail Between Nancy Pelosi’s Office & the Capitol Police”