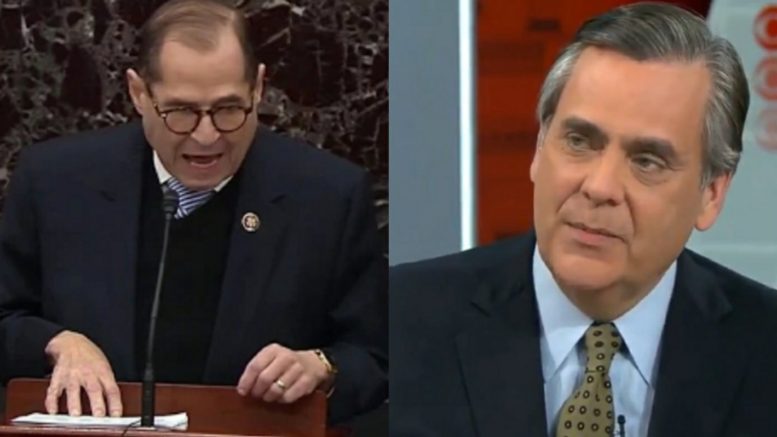 Professor Jonathan Turley spoke with CBS News Thursday, weighing in on the Senate impeachment trial, and knocked House impeachment manager Jerry Nadler, who had made the accusation that Republican Senators could be engaged in a cover-up if they don’t vote for new testimony and evidence.

“Where politics and law collide… one of the things that you teach law students is that when you make arguments to juries, make sure you don’t insult the jury,” Professor Turley advised. “You don’t want to make statements that make them feel stupid or ascribed, any bad motivations to them.”

“If there’s one major blunder during the argument, it was Jerry Nadler, who got ahead of his sceeze a bit,” the George Washington University Law School professor said. “[Nadler] said that the Senate could be engaged in a cover-up.”

“When he said that, people on the floor recounted later that there was sort of a hush, a reaction from the Senators. This is not the place for that,” he recommended.

“What was notable is that it was Lisa Murkowski, one of the Senators … who was the first to object outside of the chambers and say that she was deeply insulted,” Turley pointed out. “This is not just the most deliberative body, it’s the most defensive body.”

“I took it as offensive,” she told reporters Wednesday. “As one who is listening attentively and working hard to get to a fair process, I was offended.”

In Nadler’s opening statement on Tuesday, he accused Republican senators of “voting for a cover-up, voting to deny witnesses, an absolutely indefensible vote, obviously a treacherous vote.”

Professor Turley also noted: “If you actually call [Republican Senators] traitors or conspirators in a coverup, it’s more likely they’re going to join together than break apart.” (Video Below)

(Related: Trump Jr. Blasts Schiff’s Demand For Fairness In The Senate Trial: “Now He Doesn’t Want To Play By His Rules!?!?”)