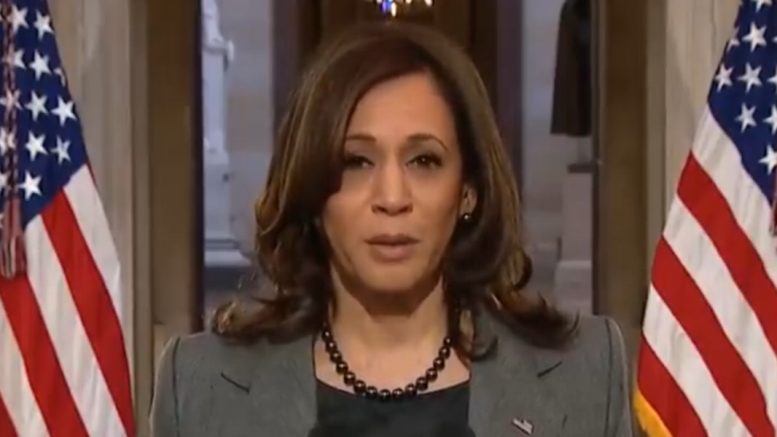 During a Tuesday interview on “The Morning Hustle”, Kamala Harris explained in her view, the situation between Ukraine and Russia — along with the sanctions imposed on Russia.

Asked to “break it down in laymen terms for people who don’t understand what’s going on and how this can directly affect the people of the United States”, Harris responded in a way that appeared to be as if she was talking to a child.

“So, Ukraine is a country in Europe. It exists next to another country called Russia,” Harris said.

“Russia is a bigger country. Russia is a powerful country. Russia decided to invade a smaller country called Ukraine. So, basically, that’s wrong,” she said. “And it goes against everything we stand for. There are terms that we use, we say, ‘We respect the sovereignty, the territorial integrity of countries’, right? They’re independent”.

“Russia has gone into Ukraine — militarily– unprovoked, with no justification, other than, exercising power to take over another country,” Harris claimed. “So essentially, that’s what’s at stake. We as America are saying, ‘That is wrong. And we will stand with Ukraine, in saying that is wrong'”.

“And that’s why you’ll hear on the news that we talk about sanctions, which is basically having Russia pay a financial cost to the point that we can have a real impact — have a real hurt on their economy as a consequence for their bad behavior, which is resulting in the loss of innocent lives. And that’s where we are, that’s what the issue is essentially,” said Harris.

Pressed over her alleged conflicting opinion against Joe Biden over the sanctions, Harris claimed, “We had sanctions before the actual invasion. We threatened sanctions to hopefully deter Russia from going in.”

“So we basically, like you know, if you’re a parent and you tell you children, ‘Well, if you do this, the punishment is gonna be that’, right? And we hope by doing that, it will deter our children from doing the wrong thing. Right? So that’s deterrence. That’s where we started with the sanctions, but then, when Russia actually went in, we are now implementing the sanctions. So putting them in place,” she added. Video Below

“Ukraine is a country in Europe. It exists next to another country called Russia. Russia is a bigger country." pic.twitter.com/QYPLJ02mDy

KAMALA HARRIS: "We threatened sanctions to hopefully deter Russia…You know like if you're a parent and you tell your children, 'Well, if you do this, the punishment is gonna be that.' Right? And we hope that by doing that, it will deter our children from doing the wrong thing." pic.twitter.com/jH6BQ1iNce

(Related: Leo Terrell on Why Kamala Harris Gave ‘Poor Answers’ During Her MSNBC Interview: ‘She’s Not in the Loop’