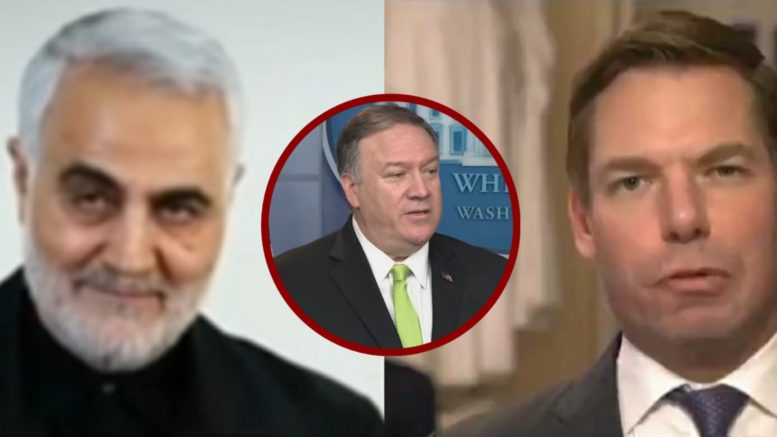 Democrat Congressman Eric Swalwell claims that the kill-strike on Qassem Soleimani was not justified because he thinks there isn’t enough evidence to show the Iranian general posed an “imminent threat” to the United States.

Swalwell’s assertion comes despite Secretary of State Mike Pompeo revealing that Soleimani was plotting to attack two U.S. embassies among other threats he posed to America, which is part of what members of Congress were recently briefed on.

Swalwell said that because Pompeo can’t say “precisely when” or “precisely where” Soleimani was planning to attack, “that aligns with the lack of evidence” he has seen during briefings.

“I would just say that’s not imminent then,” Swalwell replied. “The justification was that this was an imminent attack.”

He added, “Imminent means now, but that’s what imminent means. But they have not justified that…” Video Below

Bolduan pointed out that Pompeo defined the word “imminent” for this situation as meaning that “it is going to happen.” She then asked Swalwell if that would match his definition of “imminent”.

“Um no,” Swalwell replied. “Because that’s also the definition of, you know, New Years Eve — New Years Eve 2020 is going to happen. It’s just three hundred and, you know, fifty some odd days away. That’s not imminent.” Video Below

Briefings "have not shown imminence, [and] they have also now consistently shown that the President…puts his interests above America's interests,” says @RepSwalwell as Pompeo reasserted that Soleimani posed an imminent threat but didn't offer a time frame https://t.co/3UrMQjvZgS pic.twitter.com/3h6WKOmyIV

In ending, here is the full video of Secretary of State Mike Pompeo’s full press conference: