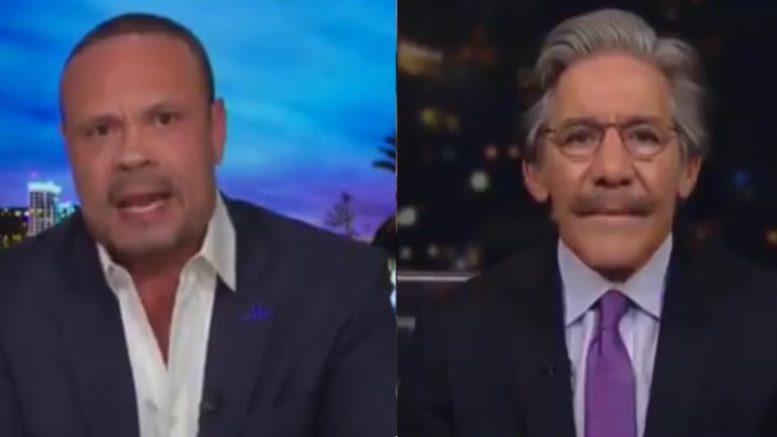 Bongino told Rivera to “‘Get your head out of your butt!” when they clashed with different views after President Trump ordered the attack that killed Soleimani.

Geraldo Rivera began by claiming the president “picked an unnecessary fight”, adding that the 25 Iranian-backed militia members were killed after the death of the American contractor should have been retaliation enough.

“I don’t know what we are doing there,” Rivera continued. “We don’t need their oil anymore. Let them fight each other and eat each other alive– the Shiites and Sunnis and their multi-year battle.”

Returning the topic back to Soleimani, Hannity asked Bongino, “What do you think he was doing in Baghdad? He was there to help Hezbollah kill Americans at the embassy. That’s what they were up to.” (Continued Below)

Dan Bongino responded: “Geraldo, he wasn’t there, Soleimani, you know, picking up cheesecakes. He was in Iraq. Now, I’ve been keeping my powder dry for a couple of days, but I got to tell you Geraldo, I’ve been pretty furious with some of your comments on the network. … And I have not knocked you until I faced you live. But I got to tell you, your comments are absolutely atrocious.”

“Number one: the argument that this was somehow inappropriate or unjustified or that there wasn’t imminence to the attack— I mean Unnecessary? Geraldo, let me ask you a very serious question. How many bodies– do you have an exact body count? Was Soleimani’s 600 dead Americans not enough? Is it like do we have to reach 1,000 first?” Bongino asked. “I mean, what did you think this guy did? He was guilty of ethnic cleansing.”

Rivera responded by describing his own tours covering the Iraq war, noting the 600,000 or more casualties on the Iraqi side. (Continued Below)

“That doesn’t give you the right to be wrong,” Bongino fired back. “Geraldo, I don’t sit here on the network and tell you about my time in the secret service, running around the world with the president of the United States in some of the world’s hot zones. I’m glad you did. Congratulations, nice work.”

“That doesn’t give you the right to be wrong, and that doesn’t give you special insight to say things that are ridiculous. Soleimani was one of the world’s leading terrorists. This was an unabashedly good thing. not just for the United States. but for the world. The fact that you spent time in a war zone covering it, that’s great work. You did a nice job. It doesn’t mean you’re right,” Bongino continued.

“Is that going to be the new normal, Dan? Is this the new normal?” Rivera wondered. “That we assassinate the people we don’t like? He is the number two guy in the Iranian government.”

“People don’t like?” Bongino interjected. “Geraldo, he sent 600 Americans home in body bags. It’s not like he showed up late for a birthday party. I mean, get your head out of your butt! Are you kidding me? People we don’t like? You act like this guy sent you a 50 instead of 100 in a birthday card.” (Video Below)

“I never insult you personally buddy. But you feel that you can go gutter surfing, I’m telling you right now, that I disagree with this action,” Rivera said.

Last night, @dbongino got into an explosive exchange with Geraldo Rivera on Hannity's show:

GERALDO: "Is this the normal that we assassinate the people that we don't like?"

BONGINO: "He sent 600 Americans home in body bags, it's not like he showed up late for a birthday party." pic.twitter.com/xWWKQev3dn

(Related: Chris Matthews Compares The Impact Of Soleimani’s Death To That Of Princess Diana & Elvis)