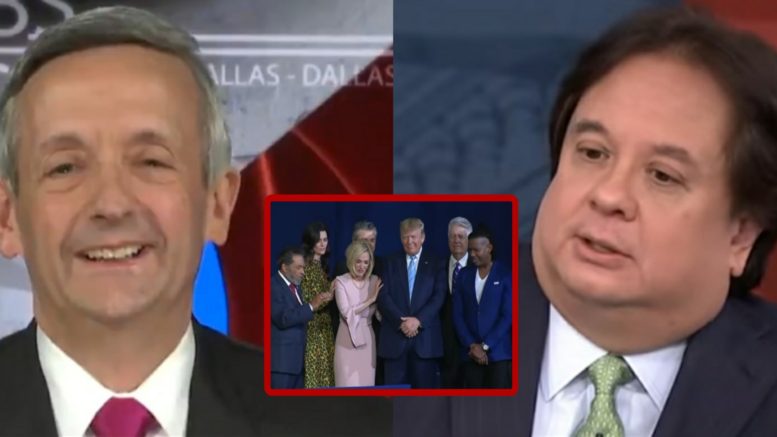 Pastor Robert Jeffress responded to a new advertisement being funded by a group called The Lincoln Project that is specifically targeting Evangelicals who support President Trump.

The group consists of Never Trumpers, including George Conway, who is the husband of White House counselor Kellyanne Conway and often attacks President Trump.

“The Lincoln Project’s first advertisement takes aim at “The MAGA Church” by splicing clips of the president and his supporters speaking about faith with clips of Trump cursing and speaking crudely,” according to a report by The Hill.

The ad ends by saying, “IF THIS IS THE BEST AMERICAN CHRISTIANS CAN DO? THEN GOD help us all.”

In his initial reaction, Jeffress declared, “This group, The Lincoln Project, is really a group of Never-Trump losers in every sense of the word.”

He went on to point out that some of the people who belong to the group belonged to the campaigns of other well-known Never Trumpers such as Mitt Romney, John McCain and John Kasich, “who are all bitters still about losing those elections.” Video Below

“And look, their whole basis in this ad of attack is that the President and those of us who support him are religious hypocrites. There’s no hypocrisy here! Neither the President or any of us claim that he was a perfect saint — none of us is perfect,” Pastor Jeffress said.

“We knew that we weren’t voting for a Sunday school teacher when we voted for President Trump. That’s not what we needed!,” he proclaimed. “We needed a leader who would reverse the downward trajectory this country had been in after eight years of Obama and Biden, and we got that in President Trump. He is the most effective and transformational leader and President in history, I believe.” Video Below

Here is The Lincoln Project’s advertisement Pastor Jeffress was referring to.