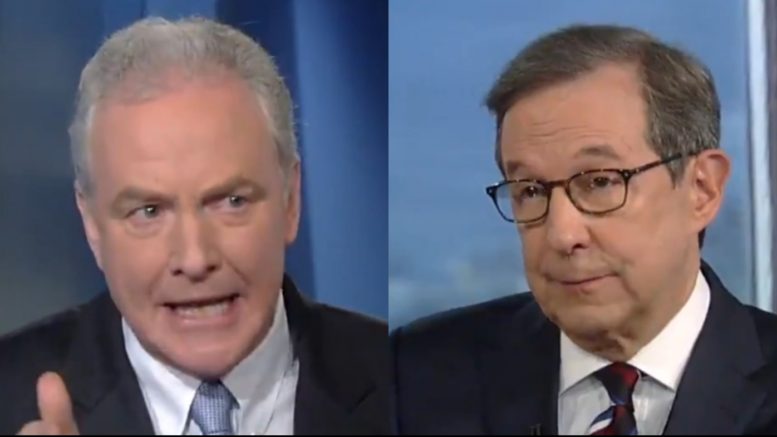 While being interviewed by Fox News host Chris Wallace, Senator Chris Van Hollen (D-MD) insinuated that the Trump Administration might have “cherry-picked” like past administrations to “further political goals”.

Van Hollen made the remarks while being pressed on why he and other Democrats immediately began criticizing President Trump from the moment Iranian military general Qassem Soleimani was killed in an airstrike.

Wallace mentioned the claim made by Trump Administration officials that there was an imminent threat posed by Iran and eliminating Soleimani prevented it.

“I think we learned the hard way, Chris, in Iraq, in the Iraq war that administrations sometimes manipulate and cherry pick intelligence to further their political goals,” Van Hollen said.

“That’s what got us into the Iraq war,” he added. “There was no WMD (Weapons of Mass Destruction).” Videos Below

Wallace interrupted and said, “I understand that happened in the past. Are you saying it’s happening now?”

Van Hollen didn’t directly answer the question and instead criticized the Trump Administration for not briefing the Gang of Eight about their strategy and for not yet providing evidence to support their claim of an “imminent threat” posed by Iran.

“Look, everybody knows that Soleimani was a very bad, despicable guy. There’s no debate there. But the claim of an imminent threat, they have not supported,” Van Hollen said.
He then claimed Americans are now put in a “greater risk” as a result of President Trump’s decision, and somehow the U.S. accomplished Soleimani’s goal by killing him. Videos Below