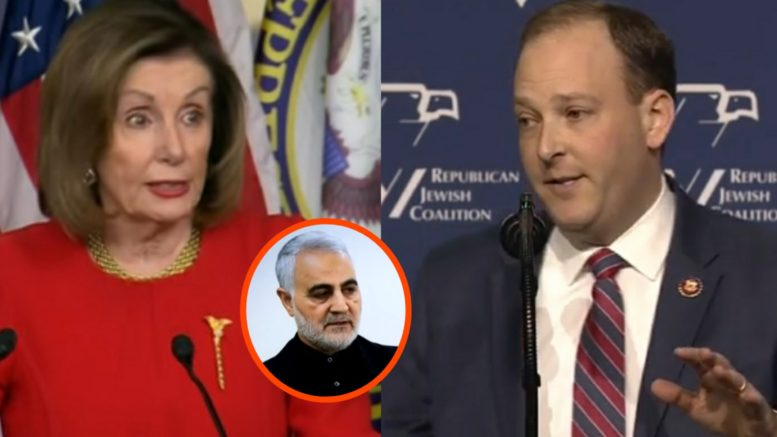 Zeldin was set off by Pelosi, who appeared to insinuate that the killing of Soleimani was a “disproportionate” action carried out by the Trump Administration.

As part of her statement on Soleimani’s death, Pelosi said, “American leaders’ highest priority is to protect American lives and interests. But we cannot put the lives of American servicemembers, diplomats and others further at risk by engaging in provocative and disproportionate actions.”

She continued, “The Administration has conducted tonight’s strikes in Iraq targeting high-level Iranian military officials and killing Iranian Quds Force Commander Qasem Soleimani without an Authorization for Use of Military Force (AUMF) against Iran. Further, this action was taken without the consultation of the Congress.”

Pelosi then demanded that the Trump Administration brief Congress on the strike and any further action they plan to carry out.

After reading Pelosi’s statement Congressman Zeldin slammed the House Speaker over her rhetoric and laid out how the kill-strike was indeed a proportionate act. See Below

“‘Disproportionate’? Seriously?” Zeldin questioned. “Over 500+ US troops were killed & thousands more were injured, bc of Soleimani, & he was actively planning new attacks against US troops & diplomats.”

“Pelosi is totally blinded with party over country partisan politics,” he declared. “POTUS def made the right call!” See Below

“Disproportionate”? Seriously? Over 500+ US troops were killed & thousands more were injured, bc of Soleimani, & he was actively planning new attacks against US troops & diplomats. Pelosi is totally blinded with party over country partisan politics. POTUS def made the right call! https://t.co/yIs36RRGNC

Auschwitz Memorial Releases a Statement As Russia Attacks Ukraine: ‘This Act of Barbarity Will Be Judged by History’