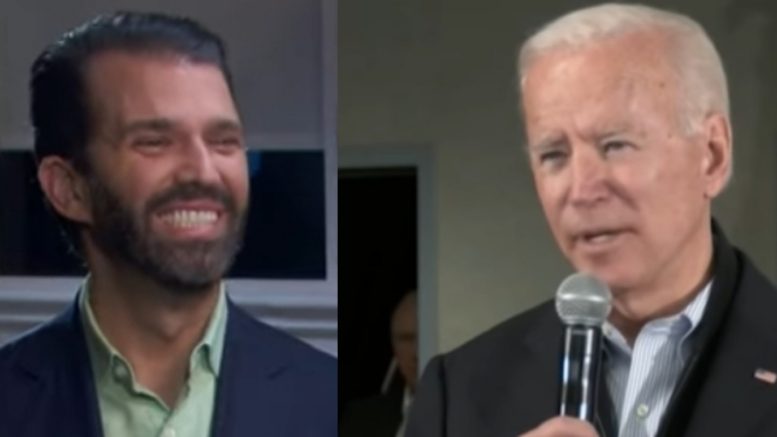 In an interview with CNBC’s John Harwood, Democrat Presidential candidate Joe Biden claimed President Trump is “ripping the soul out of this country,” and tax plan has been a “disaster for the middle class.”

“What people have now seen is that his tax policy has been a disaster for the middle class, disaster for them, and that there is plenty of room to be able to do things that make a lot of sense,” Biden said in an interview released Friday.

He followed up with a tweet on Friday that said, “A job is about a lot more than a paycheck. It’s about dignity. It’s about being able to look your kid in the eye and say everything is going to be okay—and mean it. Too many people today can’t do that.”

“We have to rebuild an inclusive middle class and restore the dignity of work,” Biden said.

Biden’s comments came as a new report indicates 266,000 new jobs were added in the U.S. in November.

Donald Trump Jr. mentioned the job surge along with other key takeaways  from the jobs report in his response to Biden. Video Below

Related Article: Don Jr. Slams Professor Karlan Over Her ‘Joke’ With Barron Trump’s Name: “Remember Only Children Of Liberals Are Off Limits”

“Even CNN said the #JobsReport “blows away” expectations,” he added. 266,000 new jobs, 50-year low unemployment: 3.5%, historic low unemployment for women, blacks, Latinos, Asians & veterans — Do you have any idea what you’re talking about? Seriously?” Video Below

Even CNN said the #JobsReport “blows away” expectations.

Do you have any idea what you’re talking about? Seriously? https://t.co/5q2pJxYIEY

In ending, here is Brad Parscale’s reaction to the jobs report.

The Trump Economy is CRUSHING it!

Now over 7 MILLION new jobs since @realDonaldTrump was elected!pic.twitter.com/RIl5CkIzrt