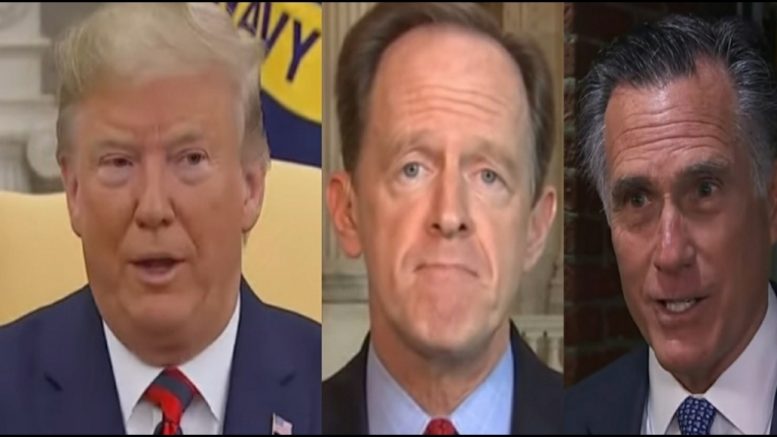 Toomey and Romney are the only two GOP senators who have gone on to voice disapproval of Trump’s decision to spare Stone three years and four months in prison for crimes related to the Russia investigation.

After learning of Stone’s commuted sentence, Sen. Romney tweeted, “Unprecedented, historic corruption: an American president commutes the sentence of a person convicted by a jury of lying to shield that very president.”

Toomey soon followed Romney’s lead, on Saturday, and rebuked Trump’s decision and called it a “mistake.”

“This authority should be used judiciously and very rarely by any president. While I understand the frustration with the badly flawed Russia-collusion investigation, in my view, commuting Roger Stone’s sentence is a mistake,” Toomey said in a statement. “He was duly convicted of lying to Congress, witness tampering, and obstructing a congressional investigation conducted by a Republican-led committee.”

“Earlier this week Attorney General Bill Barr stated he thought Mr. Stone’s prosecution was ‘righteous’ and ‘appropriate’ and the sentence he received was ‘fair.’ Any objections to Mr. Stone’s conviction and trial should be resolved through the appeals process,” he added.

Related Article: Don Jr. On Reports That Romney Won’t Support Trump: “As If Trump Or Any Other Republican Candidate Would Give A Sh*t”

President Trump lashed out at both senators on Sunday evening.

“Do RINO’S Pat Toomey & Mitt Romney have any problem with the fact that we caught Obama, Biden, & Company illegally spying on my campaign?” Trump tweeted. “Do they care if Comey, McCabe, Page & her lover, Peter S, the whole group, ran rampant, wild & unchecked – lying & leaking all the way?” NO!” Video Below

In ending, here is video of Jesse Watters who urged his audience why they should not fall for the “Roger Stone hysteria”: