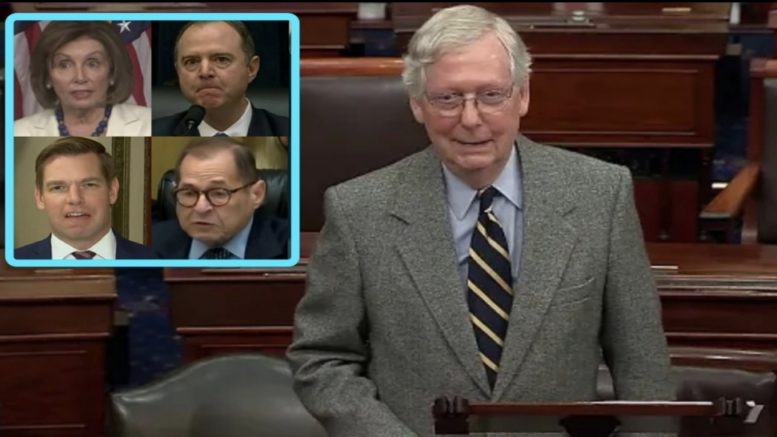 Senate Majority Leader Mitch McConnell slammed House Democrats’ handling of the impeachment process while speaking about the Senate’s role in an impeachment trial on Friday.

In his Senate floor speech, McConnell blasted House Speaker Nancy Pelosi for failing to keep her promise of not going down the path of impeachment unless there is something “so overwhelming and compelling and bipartisan”. And he suggested Democrats have instead chosen to rush the process and “let ‘Trump derangement syndrome’ develop into the kind of dangerous partisan fever that our founding fathers were afraid of.”

As transcribed from his Senate floor speech, McConnell stated:

“But ultimately House Democrats cared more about attacking President Trump than keeping their promises. So they rushed through a slapdash investigation. They decided not to bother with the standard legal processes for pursuing witnesses and evidence.

“Chairman Adam Schiff told the entire country on national television that getting court decisions takes a long time and he did not want to wait. So they just plowed ahead with an historically weak case and impeached a duly-elected president with votes from just one political party.

“Democrats have let “Trump derangement syndrome” develop into the kind of dangerous partisan fever that our founding fathers were afraid of.

“And then, just before the holidays, this sad spectacle took another unusual turn: As soon as the partisan impeachment votes had finished, the prosecutors began to develop cold feet. Instead of sending the articles to the Senate, they flinched.” Video Below

“That’s right: The same people who’d just spent weeks screaming that impeachment was so serious and so urgent that it could not even wait for due process now decided it could wait indefinitely while they checked the political winds and looked for new talking points.

“This is yet another situation where House Democrats have blown right past the specific warnings of our founding fathers. Alexander Hamilton specifically warned about the dangers of a “procrastinated determination of the charges” in an impeachment. He explained it would not be fair to the accused and it would be dangerous for the country.

“But Speaker Pelosi does not care. Her conference is behaving exactly like the, quote, “intemperate or designing majority in the House of Representatives” that Hamilton warned might abuse the impeachment power.” Video Below