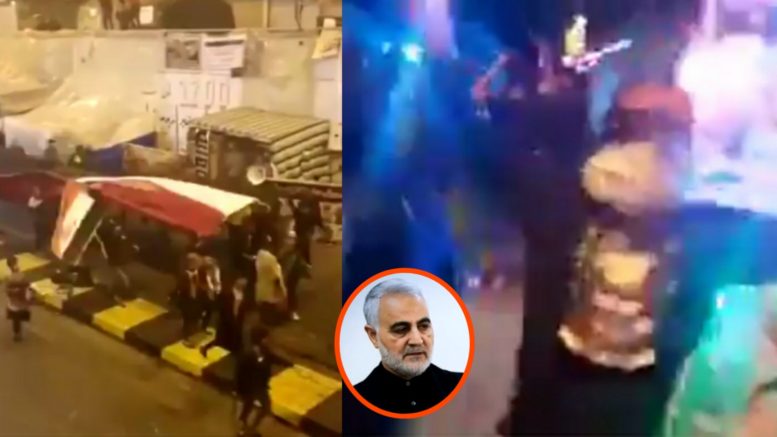 Iraqi citizens are celebrating after Iranian Gen. Qassem Soleimani, the head of the Islamic Revolutionary Guard Corps’ elite Quds Force, was killed in an airstrike at Baghdad International Airport.

A total of 7 others were reportedly killed in the airstrike, including Abu Mahdi al-Muhandis, the deputy commander of Iran-backed militias known as the Popular Mobilization Forces.

Hours after news broke of the airstrikes, Secretary of State Mike Pompeo tweeted a short video showing Iraqis “dancing in the street for freedom.”

The crowd of Iraqis are seen carrying a giant Iraqi flag down the street in celebration of Soleimani’s death. Video Below

Iraqis — Iraqis — dancing in the street for freedom; thankful that General Soleimani is no more. pic.twitter.com/huFcae3ap4

According to a Middle East journalist by the name of Heshmat Alavi, Iraqis “long considered Iran’s dictator Khamenei & IRGC Quds Force chief Qasim Soleimani as the source of all their miseries.
Soleimani was the commander of Tehran’s conglomerate of proxies in Iraq & across the Middle East, responsible for killing hundreds of thousands.”

Alavi tweeted more video footage of Iraqi’s celebrating Soleimani’s death, which can be seen below.

My take:
True Iraqis are celebrating.
Tehran-backed militia members/supporters in Iraq are mourning.pic.twitter.com/ZI3oHy0ANH